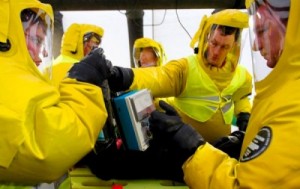 The Vienna Commission for the Nuclear Test Ban (Ctbto) informed that small traces of radioactive material leaked from the Fukushima Daiichi nuclear plant have spread through the north hemisphere of the planet. Over 30 radionuclide stations informed that the hazardous gases were detected in Eastern Russia, the discovery was made on March 14, two days later it was discovery in the east coast of USA.

Meanwhile the International Atomic Energy Agency (IAEA) reinstated that the radiation discovered is minimal and it does not represents a health hazard. After nine days of the Fukushima incident, the radioactive cloud had already reached North America, and three days after that the Ctbto discovered radioactive material in Europe.

The radioactive material has spread through northern hemisphere, while the equator line acts as a divisor line of the wind currents between the north and south hemispheres. At the moment around 1,200 academic and scientific institutions share their information with 120 countries members of the International Energy Agency (IAEA) and World Health Organization (WHO).