Rafael Correa announced the law on capital gains, at the opening of the Habitat I conference 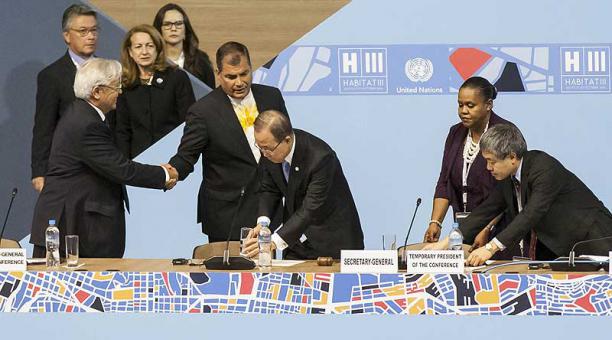 A hot and sunny morning welcomed thousands of people who arrived early to enter (after a long line) to conferences held yesterday in Quito, on the first day of the Conference of the United Nations that speaks of Housing and Sustainable Urban Development, Habitat III. With a full house, mayors of the world, members of the Leadership Group of Cities against Climate Change C40, gathered to make public, once again, their request to national governments and international institutions to help them finance their sustainable projects.

That, to fulfill the objectives of the Paris Agreement (cop21) on climate change. The meeting was attended by mayors Michael Müller, of Berlin; Enrique Penalosa, of Bogota; Miguel Angel Mancera, of Mexico City; Mauricio Rodas, of Quito; Helen Fernandez, of Caracas; Manuela Carmena, of Madrid, and Ada Colau, of Barcelona; and Mayor Claudio Orrego Larrain, of Santiago de Chile. Together, they exposed six reforms that, if implemented, would help to create a sustainable future with low carbon emissions.

The reforms included that the power of financial control is transferred to the cities, that national governments create a stable policy and a regulatory environment, that cities have direct access to climate funds and that development banks are reformed to meet the needs of cities. Joan Clos, Secretary-General of Habitat, explained during the General Assembly that the cooperation of central governments is essential for change and, therefore, the development of cities.

The CNE calls for the registration of candidates