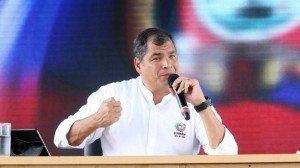 On Saturday, President Rafael Correa claimed that the Municipality of Guayaquil bought lands at a lower cost than the Ministry of Environment, in the same section of the Samanes Park and at the same time, between May and July 2010.

“2’208.600 square meters (220 hectares) were sold to us at $ 48 million dollars, that means that the Ministry of Environment paid $ 20 per square meter in 2010,” said the president from Chillanes (Bolivar) where his weekly address number 463 was broadcast.

He immediately showed a clapperboard with information of the lands expropriated by the Municipality of Guayaquil. “At the same time, May 11, 2010, they bought the underlying lands at $ 1.61 per square meter. They sold them (to the central government) 12 times more per square meter. Here a compelling evidence of how they extra charged us.”

Sampedro will face a freedom trial

There was a ‘variation’ in equity of 21 Ecuadorian legislators, according to analysis