Rafael Correa: “I am politically responsible for corruption, but not judicially” 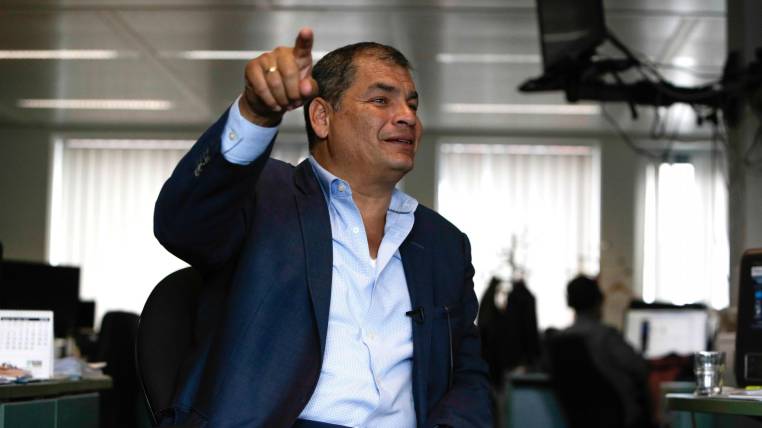 Former President Rafael Correa has deployed a defense strategy that portrays him, internationally, as a victim of political persecution at whose peak is, according to him, the Government of Lenin. This two-hour interview addresses the Balda case, but also the 10 years of its management.

Wouldn’t it have been more prudent to appear before the judge last week, while the precautionary measures were reviewed?

Any pretext is good, do not be fooled. From the beginning, the plan was to put me in impossible conditions to be remanded in custody. It is a strategy that has been well assembled since at least the month of November. Check the complaint presented by Balda six years ago, he presents it against Pepe Serrano, against the whole world, less against me.

Do you not plan to stand trial or surrender, if you are convicted?

Look at how things are handled. You are talking to a former president of 10 years and we have to talk about whether I go to trial, if they put me in jail. What a pity! In any case, in these trials, without the presence of the accused, you cannot continue. That is the strategy. Putting myself in custody, so I cannot defend myself, because I would go to jail without any guarantee. I do not have presidential protection, I do not have anything. And then, they stop the trial until it prescribes in eight years. But they are not going to stay there. They want to take a trial of embezzlement on the issue of debt, to have me out of life.

Then you will not show up?

I cannot go. There are no guarantees.

Does the victim’s position benefit you internationally?

It’s a painful position, it’s complicated, but in the final result, I do not know. It can be advantageous. But it is the fifth or sixth accusation made to me since November. They try to break us economically, emotionally and family.

Is it confirmed in his controversial statements about the bitterness of President Moreno?

The government mutilated my statement. I’m not stupid. Nobody has done more for the disabled than me. They pulled out when I said “sometimes, in some cases”. But I confirm that Lenin Moreno has had a deep hatred and one of the psychological reasons can be a great trauma.

Does not the pronouncements of Maduro and Morales seem an interference to Ecuador?

How will it be an interference? Silence is consent. In situations of injustice, being neutral is being on the oppressive side. It is a duty to denounce.

In what country would you apply for asylum?

I prefer to save my options, but there are many.

You question that the case is based on personal testimonies, but this happened with Galo Lara and also with Fujimori..

What prejudices you have! The testimony must be checked with a message, a record of calls. But ask where the call record is. There was not. Or where is the phone, what number was … I am not an expert in the Galo Lara case or in the Fujimori case but there were more than testimonies.

Have you already filed a complaint against those who accuse you?

Must see. I, I hope to resist until this is resolved politically and I hope it is earlier. Of course there will be lawsuits against so much infamy, slander, etc.

When you was in the Government, you won every case in Justice. What has changed?

I lost more cases than I won, but they were not news.

On the corruption of Odebrecht, you and Jorge Glas have said that it is also a persecution. Was the whole case set up in the region against you?

I have not said that. Odebrecht was corrupt and corrupting. Also in Ecuador. But not with the vice president. Corrupted middle managers of Petroecuador. They were career officials, like Marco Calvopiña, but you listen to the news and they are all from the Correa government.

If the corrupt plot is real, who wanted to implicate Glas?

It’s obvious: Moreno. It hindered him because he was not of his group. I’m going to tell you an incident: the one who asked Jorge Glas to be his binomial was Lenin Moreno. Now he says no, he is a liar. And one day, meeting the political bureau in Carondelet with me – it was not Lenin Moreno but Eduardo Mangas, his representative – they say they do not want Jorge to go because there are rumors of corruption. They wanted to put María Fernanda Espinosa and at that time I said ‘well, we are left without a binomial, I do not lend myself to this racket’. And then, they had to give in. From there, they made his life impossible and put together the plot.

That’s why they removed Glas from the posters in the second round?

I did not notice that. On the contrary, in the second round, the vice president was used much more. Especially for the campaign on the Coast.

When mentioning Carlos Pareja Yannuzzelli, Alecksey Mosquera, Esteban Albornoz or Ramiro González, ex-ministers of his Government implicated in irregularities, he recalls one by one that they were not from Alianza PAIS.

Do you feel responsible politically for the corruption cases that have been going out, for not seeing what was done?

It is an absurdity. How one will know everything! In any case, yes, I am politically responsible because it was my Government, ministers that I named. One is always politically responsible when these things happen. Another thing is to be a judicial culprit. But they do not know how to differentiate, more democratic maturity is needed. In addition, in 10 years, it is impossible not to find a case of corruption.

What about former Vice President Glas?

Yes Yes. I know he said no. I do not share it. I think so. But the last person in charge is me, because I delegated to the vice president. But another thing is that it is guilty judicial. Being politically responsible means that the people will judge him at the polls and judge him: he voted for him.

But PAIS blocked his impeachment …

First, I think he did have a political judgment. Second, it is not the only way to control. It is a mistake to believe that the audit is for criminal trials. That’s what the Prosecutor’s Office is for.

Many of the works of your Government, became more expensive. Some are under investigation. Were  those adjustments not controlled?

With much malice and bad faith, Moreno said that there were different works with overpricing, which is illegal, referring to 180 works with price adjustments. The readjustment of prices is perfectly legal, it is a problem, but it is underdevelopment. It is not planned well, but it is not deceitful.

But they also paid surcharges and they were not detected …

Because no method is infallible. If Odebrecht gives bribes to the inspector, which is already difficult because in the big works they are international auditors …

Would favoring public competition against direct contracting have limited those cases?

It’s not true either. The corruption of Odebrecht came with many contracts with a contest. He bought Petroecuador’s technical team to change the bases in his favor. The other competitors noticed and Odebrecht paid to keep them quiet.

In the economic plane:

Who made the decision that the BCE would lend money to the Government and, later, that debt be canceled with assets of the public bank?

That’s short-term financing and I did not intervene. But I would have fired the Minister of Economy if he did not use the liquidity of the Central Bank, which was our own money. The bank reserve was never touched. He always maintained what was necessary.

About the breaking of PAIS

When did you start to consider Lenin Moreno as a traitor?

– It was after the arrest warrant for Walter Solís and the whole case of Odebrecht corruption that they were making me believe that I had not done anything, when what happened was that on June 1 (2017) the denunciation was known from Brazil. We had a very strong meeting and there we learned that they had pressured the prosecutor Baca to put many more prison orders. Then Lenin called me once. He got angry, it seems, for some tweet. Then I wrote him a letter, telling him that I wanted to give him all the freedom to govern and keep quiet, but that I could not allow him to denigrate my government either. He never answered and there the communication was cut off.

Is José Serrano still an ally?

No. I know that now he is repentant, but he is one of those responsible for what happened.

The role of the press:

They claimed to pursue corruption but when this newspaper published a gloss on the Pacific Refinery, they did not send for an investigation but ordered a sanction to the environment …

I do not remember the case, but I do not think they were sanctioned for pleasure. If there was a gloss on the Comptroller’s Office, how will they sanction the newspaper? There must be something else there that is not telling me. In any case, we can ask for the sanction but who establishes it is the Superintendence of Communication that was autonomous.

It supports its defense strategy that included investment in development (schools, roads …). The violence is due to the fact that the Government eliminated the security coordinating ministry and does not invest.

Correa defends that he left a sustainable debt and the measurement with the consolidated figure (without the pending among public entities). For the IMF, the Government does not include the IESS nor the ECB, but for the Constitution, yes.

Debt sections were kept confidential because, according to Correa, China demanded it by offering better conditions than others. The payment with oil, ratifies, was a good business given the needs of each country. (I)

Water brings a new ‘Odebrecht’ to the region