Rafael Correa is denounced in Colombia 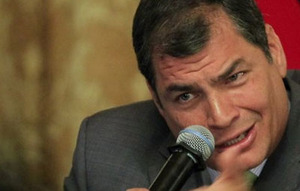 Last Thursday a Colombian lawyer entered a complaint with the prosecution of his country against the regime of Ecuador and President Rafael Correa for the alleged violation of national sovereignty.

The motion was put by the attorney Jaime Restrepo, the document is based on the events of May and August 2012, when Ecuadorian police officers allegedly entered Colombia to spy and kidnap the former Ecuadorian assemblyman Fernando Balda.

Balda is a politician known to be a staunch opponent of the regime and was expelled from Colombia in October 2012. Back in Ecuador in February he was sentenced to a year in prison for threatening state security by reporting the existence of a center of espionage in his country.

The expulsion by Colombia was made by order of the Ecuadorian government, which argued that Balda had a prior conviction of two years in prison for libel accusations.

However the report highlighted the violation of Colombian sovereignty and accused the government of Juan Manuel Santos for “not having lifted a diplomatic note of protest against the government of Rafael Correa by these facts.”

Today the members of the electoral boards are notified