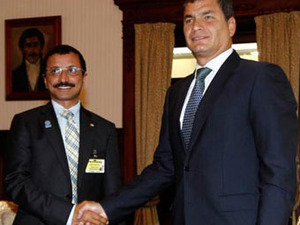 In a yesterday meeting with the Sultan Ahmed Bin Sulayem, Chairman of DP World Company, an enterprise that manages 65 port terminals in the world, discussed with the leader of the regime, Rafael Correa, the possibility of building a deep water port in the country.

According Rivadeneira, DP World is interested in the project and the company already had its first contacts with the City Hall, on the same subject.

The location of the new deepwater port generated a debate between President Correa and the mayor of Guayaquil, Jaime Nebot. The first said that “the deepwater port in the Port of Guayaquil can be in Posorja itself and it can be a little further, near Chanduy” while the Mayor maintained that it has to be in Posorja, which is in the jurisdiction of the city and make it in another canton or province would harm Guayaquil.