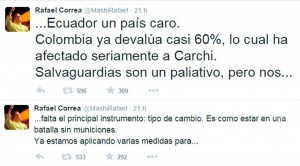 The president of Ecuador, Rafael Correa, said that the country lacks “the main instrument: the exchange rate. It’s like being in a battle without ammunition,” he posted on his Twitter account.

This before “the tough economic situation” being experienced by the country. The president pointed out as problems the falling oil prices and the dollar appreciation.

Yesterday, during his press conference, he dismissed an exit from dollarization: “We have said that dollarization will continue, but we are also speaking about the technical atrocity, even in terms of sovereignty, the adoption of dollarization meant. Today we are suffering the consequences due to lack of exchange rate,” he said.

Correa also commented via Twitter that Colombia already devalued by nearly 60% its currency, which has affected Carchi and that safeguards (tariffs on imported products in March 2015) “are a palliative.”