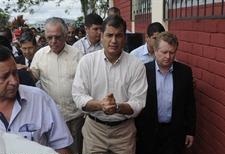 This morning, Ecuadorian President, Rafael Correa, visited the neonatology area of Gustavo Dominguez Hospital in the province of Santo Domingo de los Tsáchilas, which is under investigation due to anomalies of possible neonatal infection.

The president along with Minister of Health, David Chiriboga, conducted a full inspection and reported that restructuring would be implemented in this house of health and said that these anomalies have solutions.

“(…) the state already gave money and we have taken decisions to solve the problems, but indolence and incapacity has prevented the progress”.  Correa also rejected the lack of management by those responsible for failing to comply with the construction of the emergency area in the zone.

Chiriboga ordered to dismiss the legal field officials of the Secretariat of State; because they did not solve the legal problems they had with the construction companies which did those works.

The Head of State is scheduled to meet today with the Association of Physicians of Santo Domingo de los Tsáchilas (Hover).

Gadhafi’s Army Is Attacked By France and the United States