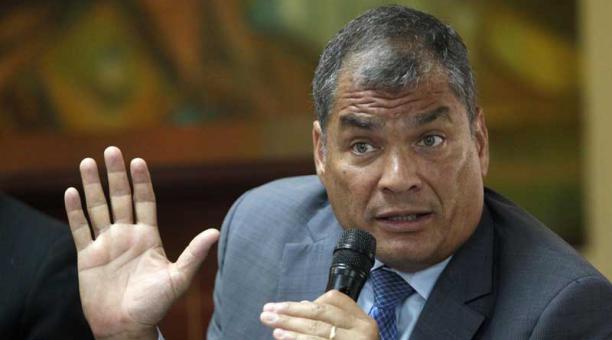 The Prosecutors Office notified former President Rafael Correa to render a version through a video conference from the Consulate of Ecuador in Belgium on Wednesday, March 14, at 08:00.

This diligence was indicated within the investigation in the Singue case, where alleged irregularities are investigated in the process of concession of the oil field of the same name, located in the Amazon. Correa’s version was notified on Tuesday, March 6, 2018, and it is after the controller in charge, Pablo Celi, requested that the former head of state be investigated because he knew about the negotiation of that field.

Celi also informed the Prosecutor’s Office that Correa received in 2011 a letter from the manager of Dygoil, one of the companies that was awarded the oil block. In that letter, the company told Correa that “with surprise” he has received notification from the Ministry of Natural Resources that the contract for the Pucuna field would not be signed.

In addition, for the subscription of Singue “it was required to present a guarantee of 20% of the investments, a requirement that was not required of any company that participated in a similar process …”. He also noted that the group of companies that make up the Amazon Oil Consortium has accepted “all the conditions” of the Negotiating Commission of the Ministry of Natural Resources and the Hydrocarbons Secretariat. “We want to continue investing in the country.”

The president of Dygoil, César Guerra Navarrete, was also summoned to expand his version of this case. His appearance is scheduled for this Friday 9 at 12:15. The file was initiated from the report of the Comptroller DASE-0045-2017, where it is established, for example, that the State negotiating team miscalculated the internal rate of return. That caused a damage to the State reaches USD 5.2 million. (I)