Red diffusion and extradition of Rafael Correa, tied to the National Court of Justice 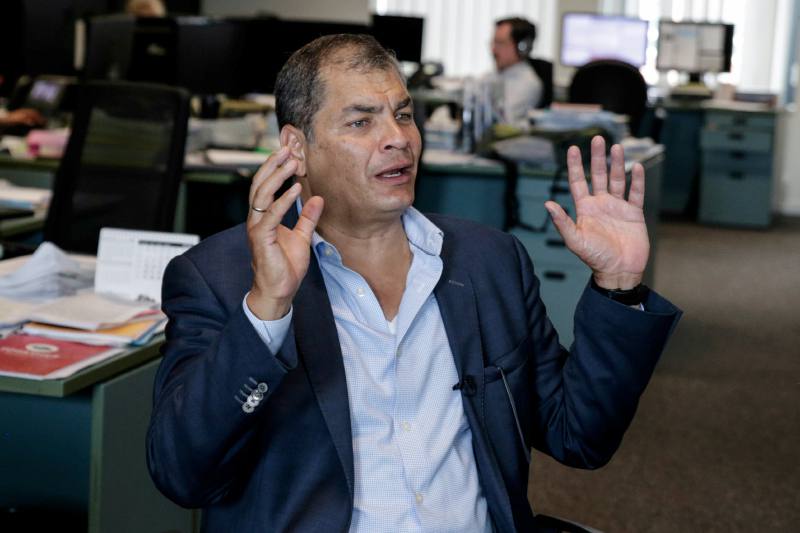 “I’m fine. Do not worry. They will seek to humiliate us and make us have a hard time, but such a monstrosity will NEVER prosper in a State of Law like Belgium. “

That was the response that former President Rafael Correa issued, using his Twitter account, once Judge Daniella Camacho ordered, on Monday, that the precautionary measure of periodic filing that he failed to comply with be modified by a preventive detention order that included the issuance of a red broadcast against him, for Interpol to detain him for the purpose of extradition.

Inside the fiscal instruction that investigates the kidnapping of the politician Fernando Balda, in Colombia in 2012, this is the second time that Camacho orders a preventive prison, tied to a red diffusion and to an extradition process.

The first order of this type was issued on May 31 last against Pablo Romero, former Secretary of Intelligence (Senain).

The internationalist Carlos Estarellas agrees with the former president that Belgium is a country where the law is complied with, so he “is sure” that they will act in response to an extradition request against Correa. Moreover, he says, when there is a valid extradition agreement between Ecuador and Belgium, signed on May 28, 1887.

According to Estarellas, although the red diffusion and the request for extradition are based on requests from the judge of the case through the National Court of Justice (CNJ), both are parallel issues. He does not see it necessary for Interpol to locate Correa, since he has already indicated in which country he is. He believes that Ecuador should request extradition directly to Belgium.

Caupolicán Ochoa, Correa’s lawyer, says that while the appeal against the measures is being processed, the preventive detention and the rest of the decisions have no effect.

It clarifies that a Tribunal of the CNJ must evaluate the violations of due process that have existed and have resulted in a process of ‘persecution’.

On June 7, the CNJ sent the request for Interpol to locate and arrest Romero. Nine days later, on June 16, he was arrested in Madrid, Spain, and only a day later he was released by Spanish authorities under the obligation to appear every day during the extradition process against him.

At the moment, Romero maintains two processes in force in Spain: one for extradition raised by Ecuador and another for political asylum that he requested. None has been resolved yet.

Balda’s defense, Felipe Rodríguez, rules out that the appeal filed by Correa restrains the order against him. Although he believes that the process of red diffusion could take about two weeks, since they have to leave several offices and wait for the judge to notify his resolution in writing, it is clear that the court and the CNJ should be agile and thus specify the judicial provision.

In the midst of this, Rodriguez acknowledges that if Correa manages internationally well the one with a Belgian family or the nationality of his wife, he could stay in Belgium.

Estarellas explains, given the possibility that Correa requests political asylum in Belgium, that if this request is granted it would complicate the extradition, since he would be recognizing that he is persecuted in his country.

Balda has announced that he will begin a tour of various embassies and consulates of European countries in Ecuador.

That he would begin with the Belgian embassy, he said, and that its authorities will take documents so that it is constant that it is not a political persecution, but a serious state crime that is being judged.

“They link me to a case without having any evidence, based on the testimony of a policeman who spent seven hours the previous day with the prosecutor learning the lesson.” Rafael Correa, former president. (I)

Rafael Correa entered the worst of the worlds