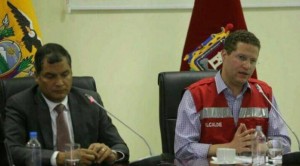 The mayor of Quito Mauricio Rodas and President Rafael Correa, together with experts from the Geophysics Institute offered a report last night on the tremors that have been registered in the capital, from the Integrated Security Service ECU 911, in Quito.

Authorities made a call to the general public remain calm and quiet.

Rodas said that 11 of the 13 injured by earthquakes were discharged and explained that the Guayllabamba-Oyacoto and Collas roads were closed to traffic and it were enabled in the afternoon-evening.

He also reiterated the suspension of mass events in the city of Quito and urged people not to “attend closed places.”

While President Correa said that aftershocks are a “normal phenomenon in these situations,” adding that “it is not true that a great cataclysm is expected.”

Hydroelectric project in Zamora has an advance of 35%