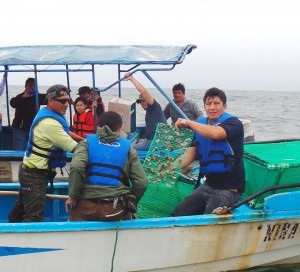 On August 12 the first sowing of spondylus and sea cucumbers seeds produced in laboratories of the coastal marine reserve in the area of  El Pelado islet, in the province of Santa Elena was performed.

Two hundred seeds of each species were planted in cages anchored about 12 meters deep, which will be monitored to see their evolution in the sea.

This first insertion into the peninsular sea was made after several studies by the National Center for Aquaculture and Marine Research (Cenaim) of the Polytechnic School of the Coast (Espol), in partnership with the UnderSecretariat for Aquaculture of the Magap.

The studies were developed by five marine biologists: Alfredo Loor, Adrian Marquez, Daniel Rodriguez, Jorge Sonnesholzner, Jorge Jaramillo and Maria Panchana and researcher César Lodeiros, who contributed with their knowledge in the mollusks laboratories of Cenaim

Stanilaus Sonnesholzner, Cenaim director, indicated that the site was chosen for its proximity and because it is a reserve area in which spondylus and sea cucumbers existed.

Both species are declared in danger of extinction. This after the biological report by the National Fisheries Institute saying that there were no alive specimens in the zones of El Pelao, La Viejita, Tello, El Acuario, 40 and La Vieja.