Several Miners Are Working Tirelessly To Find The Two Miners Who Are Buried Since Friday. (Picture by El Comercio)

PORTOVELO, EL ORO – The rescue team expectations on finding the two miners from Casa Negra rise as they found a boot and two lamps. “Our personnel are one step away from the place where the miners could be” says one spokesperson from Minesadco, the company in charge of the rescue labors of the two miners from Portovelo. According to El Comercio newspaper, the two miners are trapped in a very small vertical gallery, very simmilar to a chimney, where the landslide of rocks did not arrive.

El Universo newspaper reported that the rescue team reached the gallery where the two miners who haven’t been rescued yet are supposed to be trapped in. On Wednesday morning, the newspaper wrote that workers “succeeded in opening a gap to the horizontal mine where the two miners would be suspended by their harnesses. By opening the gap, the rescuers located a boot attached to the two lamps, which has been interpreted as a message that the two men would be still alive.”

Carlos Pareja Yannuzzelli, Vice Minister of Hydrocarbons, made an Official Announcement to the Press stating the rescue teams are 15 meters away from the place where the miners could be. “There’s a route that’s already opened, and the rescue teams believe the men are still alive since there is not any bad smell on the place.”

A helicopter arrived from Guayaquil to transport the miners and their families to medical facilities in order to take care of them once they get rescued. In addition, several ambulances are reported to be waiting for the two men to come out.

Pedro Mendoza (28 years old) and Ángel Vera (29) are buried 150 meters under, on the gold mine Casa Negra in Portovelo, El Oro, at 405 kilometers from Quito, the Capital City of Ecuador. Four miners got trapped last Friday and two were found dead on Saturday. A landslide hit the deposit where the miners were working on Friday night, and this killed two of the miners, who died from asphyxia; the other two haven’t been found yet. The landslide was caused by water leaks and rock instability .

On Tuesday night, the Techinical Manager from Minesadco announced that the two miners would have enough oxygen to survive for another four or five days inside the mine. However, El Comercio newspaper reported that Physicians who are currently collaborating with the rescue team “feared that dehydration and gas poisoning acummulated in the collapsed gallery” will be a risk to their lives.

The National Assembly ‘Expresses Solidarity With the Families Of the Miners’, President Correa Visits Casa Negra 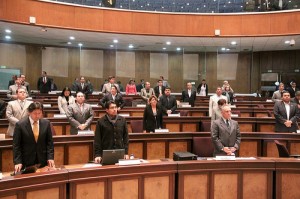 ANDES News Agency informed that in the Main Assembly, a moment of silence was given in respect to the two miners who lost their lives in the landslide. In addition, Legislators Fernando Bustamante and Rocío Valarezo proposed a project to ask the President to intensify the rescue labors of the miners who haven’t been found, by working with the National Secretary of Risks. The initiative was approved by all the other legislators present on the Session.

The project also asks Ministries of Non-Renewable Natural Resources, Labor Relationships and the Ecuadorian Social Security Institute to investigate and report on the risks and poor contracts that the miners have with their companies. Also, the project requests the National Ombudsman to get in charge of the defense of the miners who work in conditions with lack of security.

In addition, the project also asks the Government Institutions to mobilize all of their resources in order to provide the families of these miners with all kinds of aid so they can deal with the tragedy and the damage, so their basic needs can be covered and act in accordance to the Constitution.

President Rafael Correa visited the mine today to check on the progress made by the rescue team.

Rescue Team Is 10 Meters Away From Two Miners