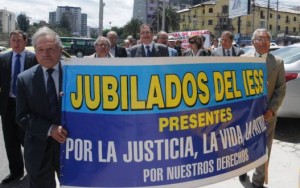 This morning, a lawsuit against the state was filed before the Constitutional Court (CC), demanding the repeal of the law that eliminates the 40% state contribution to retirement pensions. The National Association of Retirees, The Association of Retired Teachers of the Central University and former employees of the Ecuadorian Institute of Social Security (IESS),  were responsible for carrying out this process.

At 11:00 am, demonstrators reached the CC. They came marching with banners defending their position. The suspension of the utterance of the new Labor Justice Law was requested as a precautionary measure, according to Santiago Guarderas, legal advisor to the retirees.

This new law was adopted on April 14 by the National Assembly, and later, the 17th of the same month, President Rafael Correa gave the execution order. With regard to the new law, this “is a category set out annually in the state budget,” said Ramiro Montenegro, president of the Association of Retirees of the IESS.

Bomb threat at the National Assembly