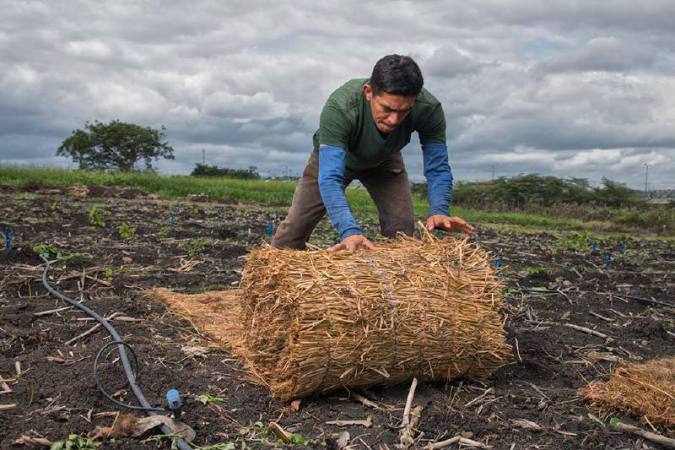 Improving the quality and temperature of soils for agricultural production, reducing weeds and optimizing water for irrigation are the objectives of rice waste based soil biomantle (dry stem, 75%) and the banana rachis fiber, (banana stem, 25%), an innovative product developed by Luis Avilés.

The initiative, which was one of the winning projects of the Bank of Ideas of the National Secretariat of Higher Education, Science and Technology in 2015 and that was endorsed by the Center for Biotechnological Research of Ecuador (CIBE) of the Espol emerged from a crisis in the banana sector, says Avilés.

For Víctor Hernández, a CIBE researcher, the product has already demonstrated its benefits in scientific studies. “We performed tests on pepper crops of the Espol for a year, the plants and the fruit developed a better height, vigorousness, and biomass. The best thing is that after biodegradation (12 months), the soil biomantle provides nutrients that are taken up by the plants in the next crop cycle,” he says. (I)

Guilds call for elevators and ramps on tourist sites

Moreno: “We have been victims of several decades of corruption.”