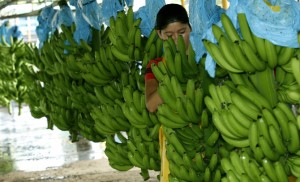 Crisis in the banana sector.

A six-page agreement clearly reflects the situation in the banana sector. Eleven signatures from the Roundtable, to which daily Expreso had access, endorse the reduction of the producer price of bananas to 10 cents.

“With these requests (15) by a majority vote it is indicated that the price of a box of bananas is lowered at 0.10 cents,” says point 2 of the agreement signed by producers Wilfrido Macias, William Ramon, Jhonny Cruz , Nohemi Capa, Franklin Torres; exporters Carlos Perez, Patricio Gutierrez, Alfredo Montalvo, Alfredo Contreras, Leandro Enrique Pulido and the Undersecretary of Commercialization of the Ministry of Agriculture, Carol Chehab.

The new price, which has not been yet released and has to be reviewd by the Ministers of Agriculture and Commerce, will be in effect from January to December 2016.

Patricio Gutierrez, according to the agreemtent- indicates that government paperwork has impacted as the recruitment costs (15%), while Colombia is cheaper and Mexico will enter the business with good fruit. Guatemala, however, with a box of $ 4.5 has overtaken Colombia and Costa Rica.

“The reality is that there will be 40 million boxes that will not be paid,” he notes. Ecuador expects to sell this year about 300 million boxes of 43 pounds. On the other hand, China now buys less while in Turkey bananas pay a tariff of 148%. “When Philippines resume production activities there will be a serious risk that Japan decrease acquisitions,” notes Alfredo Contreras.