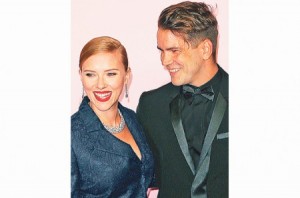 Actress Scarlett Johansson, 29, became mother this Thursday after giving birth to a baby girl in New York, according to People magazine, in its online edition and confirmed the representative of the interpreter in a statement.

The baby has been named Dorothy Rose and is the result of the relationship with the French journalist Romain Dauriac and although the couple lives in Paris, to give birth she chose the city of New York.

Johansson and Dauriac maintain a relationship since 2012 and have been committed for a year. Last July, the actress of Avangers announced she was organizing her wedding, but has not disclosed whether this has final being celebrated.

The actress, who began her career as a child in the film, said she always wanted a family.

“They say it’s not easy and I’m sure it’s true but, like everything else, we will have to plan it”, she said once.

The protagonist of the film Lucy has always carried her private life with the utmost discretion. Therefore her representative jumped at this opportunity to say that the couple want their privacy to be respected as well as their child´s

.Up to press time no baby photos were published.

Declared cease fire between Russia and Ukraine is violated