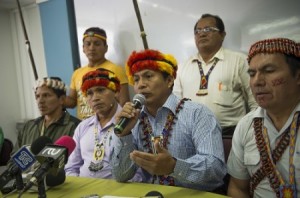 The Shuar Federation of Zamora Chinchipe and Sucumbíos showed today in Quito to express their support for the National Government regarding the exploitation of natural resources and water law initiatives.

The representatives of these communities said they are in favor of the initiatives in areas such as mining, oil exploitation and the laws for water resources.

Domingo Kasent, President of the Shuar Federation, rejected the march organized by various organizations on June 21 and said they will not participate in the marches.

David Irumenga, representative of the Huaorani of Ecuador stressed they expect the resources to be properly invested “in the people who need them most”.