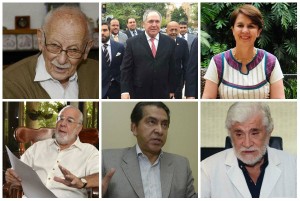 They were in the presidency after the return to democracy, but they disagree with the fact that a president has no limits according to this amendment that would be in effect from May 2017.

El Universo newspaper asked them their position on this issue

“I do not think there should be indefinite reelection, but one reelection as required by the Constitution. It is not acceptable that the Presidency is infinite like a reign. I do not agree.”

Vice president who took office after the departure of Jamil Mahuad

“I think there should be no indefinite reelection. I agree with reelection after a term or after two terms. I am a Democrat and I believe in the alternation of all public offices.”

“I definitely disagree with indefinite reelection, because it is the closest thing to a dictatorship.”

“No. I do not believe in indefinite reelection because one of the symbols of democracy is the alternation. I think there should be alternation of people and alternation of ideas in the governments. There may be perhaps a reelection for once, but not immediately afterwards.”