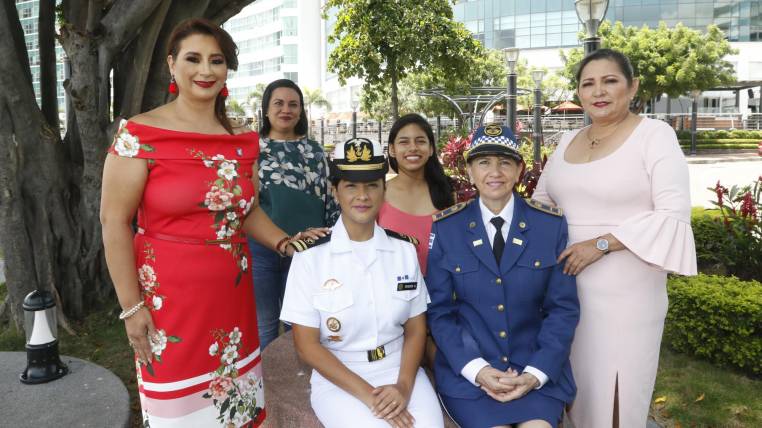 It is not a Woman’s Day either. Today 150 countries are rising for a more just and egalitarian society, a unique call in history, unpublished, that shouts to want them “free, alive, feminist, combative and rebellious”.

Spain and France will support the call for a general strike. Other territories, like ours, scheduled hundreds of activities in the framework of this international strike.

This 8M is feminist because it is not limited to a labor strike. It proposes that women stop doing care activities and show that, without all that silent work, the rest of the world falls.

About this date, EXPRESO called six women who made history in each of their positions and asked them what is missing and what they think Ecuador has made progress in this fight for equality.

The first provincial prosecutor of Guayas, Patricia Morejón, and the pioneer in presiding over the municipal Secretariat, Martha Herrera, are part of this list.

“I am committed to making a mark”

Patricia Morejón is sure that her position as Provincial Prosecutor of the Guayas and Galápagos was a design of God. “I applied for the merit contest (2016), but I already had a planned trip that I could not postpone. So I left with the idea that I would return when the deadline was over. ”

In the middle of the trip, remember, there was a problem and the term was extended, so he could reach the final exams of the contest.

The result? It was the fifth best scored nationwide and became the first woman to occupy the seat of one of the most important Prosecutor Offices in Ecuador.

The conviction and confidence in his work have led him to completely reorganize the institution. “Before applying, I went through all the units, so I knew the reality of the Prosecutor’s Office. As soon as I arrived I had to make emergent decisions. Here air conditioners were missing, Gesell’s chamber did not work and the Integral Expertise Unit needed to be organized. ”

Morejón assures that being the first woman in the position is a challenge that has allowed her to change the administrative vision of the Attorney’s Office of Guayas. “The attention to the user has improved a lot. This is an open-door Prosecutor’s Office and that is the result of working with passion. ”

The official indicates that her role as a mother gives her a plus when analyzing sensitive situations. Now his challenge, he says, is to leave a mark on the institution. “We help women to have a voice, as a child” Taking into account that the world is increasingly technological, a group of young people, all members of the organization Girls in Tech (GIT) Ecuador, led by the Guayaquil and pedagogue Lourdes Serrano, proposes that women and girls have a greater presence in the scientific field. Technology is key to building a more egalitarian future, “it’s not about feminism.” Doing so will allow them to choose what they want to be, without social pressures or stereotypes.

Girls in Tech Ecuador is the Ecuadorian presence for GIT, a movement that has a presence in more than 60 cities around the world. In the country he was born in October 2015 and, according to Serrano, is inspired by the life of Matilde Hidalgo de Prócel, the first Ecuadorian who was a bachelor, doctor and exercised the vote.

In Guayaquil, where its headquarters are located, the community has taught how to create videogames and programming, to young people from the Nigerian neighborhood (on the Trinitaria Island) and to the south of the city. Also a series of workshops and thought design processes that have helped them to have better job opportunities, “to be more visible, to raise their hands” and be the protagonists of innovative ventures. “In 2030, 80% of jobs are going to be linked to technology and engineering.”

The idea, adds Serrano, is that all have the facilities to be part of the hard sciences. The reality must change: “We do not have less capacities, we do not deserve any kind of isolation”. “We do not have the physical strength, but the firmness” 27 years ago, the then Commission of Transit of Guayas (CTG) called the candidates for the first promotion of women officers of the entity. 148 women attended and only 44 approved the course. Three remain in office: colonels Rosa Hernández and Sandra Cornejo and Major Bertha Aguirre.

The first officer exercises the functions of commander of the Traffic Commission of Ecuador (CTE). The last two work in the Municipal Transit Authority (ATM), an entity that has 127 women agents within its ranks.

Major Aguirre is in charge of the Central de Operaciones Operativas, a department that evaluates and receives telephone calls.

The official considers important the role of women in different areas. “While we perform equal or greater work than that of men, women analyze things from another point of view, even to deal with offenders,” she said.

Her beginnings as an officer were not easy. “We had to fight against the machismo that was rooted back then,” he reveals.

She sees the current situation differently, because there is a greater participation of women, although there are certain stereotypes, such as for example that most female agents have trouble telling their male colleagues personal problems or health issues.

“But beyond that, women have to excel, not let us fall,” remarks Aguirre.

“The other girls said no, but I said yes”

Genesis López, her mother had enrolled her in a new computer course. Word and Excel were the programs that this teenager expected to meet. However, the programming crossed his path and managed to awaken his inner genius.

This little girl who programmed from a cyber near her house attracted the attention of Microsoft in 2015 and managed to be the first girl to whom Kevin Turner, director of global operations of this company, came to visit Ecuador. Three years later his passion for programming has not disappeared.

She managed to venture into an area dominated by men and ensures that institutions are providing greater opportunities, without distinctions of sex. However, she regrets that even women fear to contradict society. Remember that “when I entered the course we were some women, but little by little they stopped going”.

The thought that this is a matter of men or that they are not able to do something, are the reasons that this young woman, prodigy of programming, mentions to explain that equity has not yet been achieved in the country.

With a firm voice, she emphasizes the importance of activities in favor of the female sex, but sustained. “They should not be limited only to the month of the woman” emphasizes.

Finally he calls for the eradication of the thought that “women are complicated or we make a fuss over everything” to criticize the struggle to prove that we can also.

“We have to break the taboo of fear”

Martha Herrera is the head of the Municipality’s actions since November 2016, when she became the first woman to preside over the secretariat in the history of the entity. In 23 years as a municipal official, Guayaquil owes the order. She proposed the conservation of important documentation by creating a file and sending as many documents to the museum. Nowadays, it is what respects a public administration and equality, there has been an advance. “It has broken the taboo that women are in the opportunity to be in the public and political administrative area, we have proven equality of talent, solidarity, efficiency and above all, responsibility”, says for EXPRESS on this Women’s Day. She is an example.

“They saw that I am capable,” he believes; but he knows much more than many silent voices. “It is unfortunate that there is still abuse, that happens because of not believing in themselves.” And he tries to explain what he still does not understand about this unfortunate phenomenon: “Just as they say that there is no woman in this world, that it is not fixed, that the women who have it, but who fear, do not separate to life. break the taboo of fear and bring out the hidden voice of our hearts. ” From his perspective, Ecuador is ahead on the subject. It is that the fight does not make the only time that a plant or a protest, but also the intellectual and political capacity, shows the vigor in all the areas.

“We have had to adapt to the rules of men”

Being a woman and a member of the Armed Forces is already a challenge in itself. The challenge increased for Gabriela Urquizo when she made the decision to enter the free jumping course. She and Paola Ochoa are the first Marines to pass the course and passed the complicated physical and psychological tests to jump from about 12,000 meters.

“Although my colleagues supported me all the time, my friends or family told me to think it over, to take into account that something could happen to me during a jump and my children would be without their mother,” recalls the frigate lieutenant. At the beginning it was complicated, she mentions, because they had to perform the same physical tests as the rest of her classmates, but the satisfaction of having achieved it drives her to make the decision to pursue another challenge: to be a jump leader.

Being a pioneer is very important for Urquizo, especially as a member of the Navy. “The road for us is opening. Already in the United States they have the first female rangers, so why not think that we can have the first female commando, or female frog. We have already broken that paradigm that special forces courses are only for men. ” Urquizo believes that merit is greater for women because they are the ones who have had to adapt to a society full of rules imposed by and for men. “We have a double role: mothers and professionals and even then we fulfill both responsibilities.” (I)

Legislative majority inclines towards the dismissal of President Serrano