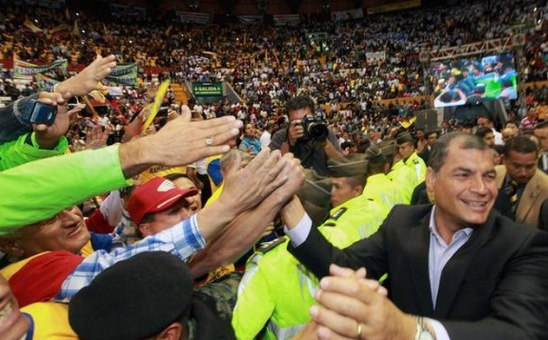 Social organizations called Thursday for a new national mobilization against the government of President Rafael Correa.
The fronts that have confirmed their participation are the Confederation of Indigenous Nationalities of Ecuador (CONAIE), the United Workers Front (FUT), the Ecuadorian Confederation of Unitary Class Organizations of Ecuador (CEDOCUT), the Popular Front, among other social groups.
Jorge Herrera, President of the CONAIE, said Wednesday night that the march is directed against the government’s proposal of the Seeds Act, the criminalization of social protests, new cases of corruption and the extractive economy based on the exploitation of mining and oil resources.
Herrera indicated that they would concentrate from 16:30 in the Social Security building in Quito.
For his part, the union leader of the CEDOCUT, Mesias Tatamuez, also called Ecuadorians to march against the high cost of living and the lack of opportunities.

Also, Luis Rueda, of the Loja Popular Front, said that the convening will start in the San Sebastian Square, and will advance through the main streets of the city against the government and the Municipal Administration of Loja.

“We want to denounce the abuses of the national government and his representative in the Loja County, the persecution against traders. This mobilization opposes to the abuses of power that occur in our city,” said Rueda.