CENTURION, South Africa. A nationwide strike for higher salaries is being held by South African civil servants unions in order to generate the necessary amount of time for members to consider government’s latest offer, said labor leaders on Monday.

On the 20th day of a strike that has affected hospital and schools, Chris Klopper, leader of a coalition of government worker unions, informed the suspension was prompt at a press conference.

”We want workers to return to work as soon as possible, and that means tomorrow,” Klopper said.

Thobile Ntola, president of the South African Democratic Teachers Union, told the members of his union, who gathered at the complex gate wearing red t-shirts, about the suspension decision. Members were annoyed after hearing such news; Ntola mentioned that the numbers at the march lines were dropping. ”There comes a time in any strike in which we must weigh our options,” Ntola said.

About two dozen unions interpreted the suspension as a victory sign, claiming the government offered a wage increase of 7.5 percent (union rejected it at first), they had 5.2 percent before. Unions wish for an increase of 8.6 percent.

South African citizens are impatient with the strike, which have been tough at times.

Some nurses have been harmed by strikers while trying to pass through march lines to get to hospitals. Hospitals have requested help from army doctors and volunteers, weaker patients have been moved.

According to what Ntola told the media, the government caused the strike, not the workers. Apparently President Jacob Zuma was 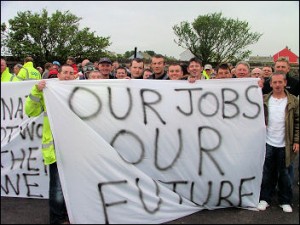 out of the country while talks were delayed. ”What has the president done? He has left the country and gone to China,” expressed Ntola.

After returning from his trip, by the end of August, President Zuma invoked negotiators to continue conversations. The new government offer was received immediately after.

Ntola denied that the strike could affect South Africa’s reputation between potential foreign investors. He thinks economic growth depends on good wages for those who provide government services. ”Our demands are genuine,” he said. ”The inequalities in this country are very vast, and they need to be closed.”