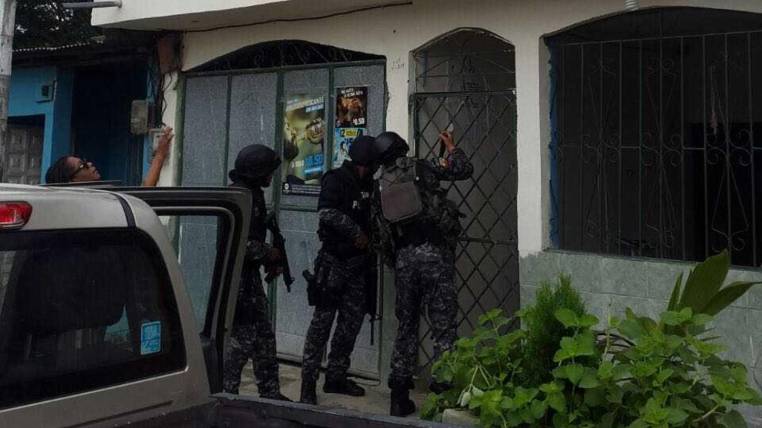 The brother-in-law of ‘Guacho’ was stopped by the attacks in San Lorenzo and Quinindé. Rescue of kidnapped, high national priority.

The military and police offensive in the north of Esmeraldas, against the ten terrorist narco-attacks and the kidnapping of three members of a newspaper team of El Comercio, began to pay off with the arrest of nine people in twenty-four hours.

Four suspects were apprehended on Wednesday and another five yesterday. They are investigated by both the car bomb in the police station of San Lorenzo, the explosion of a military patrol in Mataje and the detonation of an artisan explosive device near the Viche bridge that on Wednesday was said to be to affect its structure, but that Yesterday, it was confirmed, after the tests, that an attempt was made to fly the electricity tower that supplies energy to Esmeraldas, through the interconnected national system.

Among the group of four detainees is a brother-in-law of the Ecuadorian Walter Patricio Arízala Vernaza, alias “Guacho”, dissident of the FARC guerrillas, commander of the Oliver Sinisterra column in Tumaco, who is credited with the kidnapping of Javier Ortega, Paúl Rivas and Efraín Segarra and the authorship of the ten attacks, among them the one registered against a naval patrol in the sector of Mataje, which left three dead and eleven wounded.

Yesterday, the Navy reported the death of Corporal Wilmer Álvarez Pimentel, the most serious of the eleven wounded, who spent 16 days in intensive care at the military hospital in Quito.

With his death, the number of fatalities of the drug dealers has risen to four, leaving 38 wounded and forcing the State to triple the number of military and police personnel in Esmeraldas and declare a state of emergency, with eight curfew hours.

Upon his arrival at the Latacunga airport, before starting the itinerant cabinet, President Lenin Moreno expressed his regret and that of the Ecuadorian people to Alvarez’s family and announced that, due to the information that is being provided directly by a security adviser, integrated by distinguished generals in passive service of the Armed Forces, he has taken five decisions, which he did not detail.

He also said that he has established, with high national priority, the rescue of the three kidnapped. “We are going to make Javier, Paul and Efraín come back alive … As president, I commit all my efforts so that this can be achieved.”

“We are constantly talking, through intermediaries, about the state of journalists,” said the president, who lamented the dissemination of a video about them and asked not to do so because it causes distress especially among their families.

Lenin Moreno again blamed the Government of Rafael Correa for the serious situation on the northern border. He said that “the extreme permissiveness that had been achieved during the previous government allowed them (the drug traffickers) to move quietly on our roads, which they could not do on the Ecuadorian roads.”

Parallel to the cabinet, the Border Security Committee met in Cotopaxi, which includes the interior ministers, César Navas; of Defense, Patricio Zambrano; the chief of the Joint Command of the Armed Forces, General César Merizalde; and the general commander of the National Police, General Ramiro Mantilla. The objective of the committee is to develop protocols to provide security at the border and meet the needs of the population.

The Catholic Church raised yesterday to the central government that considers the exchange of dissidents of the guerrilla of the Colombian Armed Forces (FARC), who are imprisoned in Ecuadorian prisons, by the three kidnap victims of the newspaper El Comercio.

The request was made after the meeting that the president of the Ecuadorian Episcopal Conference, Monsignor Eugenio Arellano and other religious held with the relatives of the plagiarists who, according to the Colombian Prosecutor’s Office, are in some sector of Mataje, in Ecuadorian territory.

Through a statement, the Ecuadorian bishops said they are united in prayer for “our brothers Javier Ortega, Paul Rivas and Efraín Segarra and others, innocent victims of the kidnapping,” can return to their homes and join their activities.

They also expressed their feelings of solidarity towards their families and the people for this unfortunate event.

The curfew that prevails in the Esmeraldas province was used by the National Police for the raid of four houses, at dawn yesterday, where the last five suspects of the attack in Viche, in the canton of Quinindé (Esmeraldas), were arrested. Other actions are prepared.

Fabricio Tenorio, political lieutenant of the canton Quinindé, said that the affected electricity tower, of 138 kilowatts, provides power to six of the seven cantons of Esmeraldas. Their bases were severely affected. The structure is in the El Albe sector, a few meters from the bridge.

Personnel of Criminalistics and of the Office of the Public Prosecutor collected evidence in the car of the newspaper El Comercio, which was recovered on Wednesday, in a secondary street of the town of Mataje Nuevo, on the edge of the border with Colombia. For this purpose, armored cars, a helicopter and two military tanks were used.

The Armed Forces of the neighboring country yesterday captured members of the Organized Delinquence Group of the Gaitanist Self-Defense Forces of Colombia, who would be in charge of maintaining control of drug trafficking corridors in the department of Nariño, on the border with Ecuador. (I)

Businessmen are optimistic about measures and expect definitions