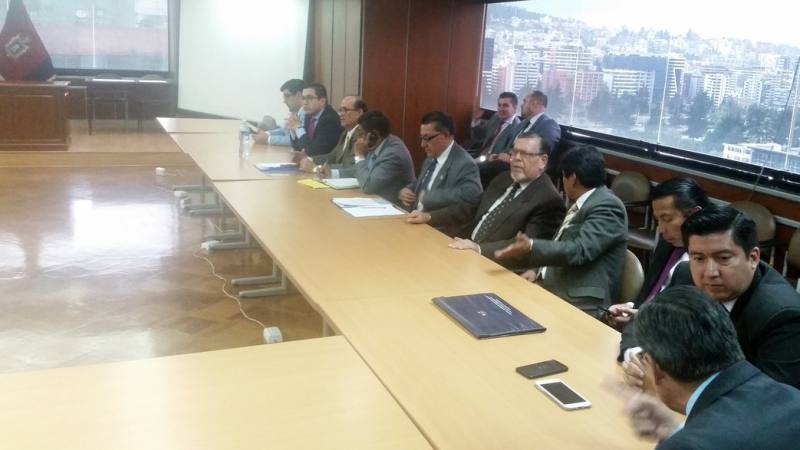 Judge Sylvia Sánchez and the judges Édgar Flores and Richard Villagómez make up the National Court of Justice that will direct the trial stage in the case of an illicit association Odebrecht in which the vice-president without functions Jorge Glas, his uncle Ricardo Rivera are being processed,  former Comptroller Carlos Pólit and ten others. The draw was made this Monday, once Judge Miguel Jurado left firm his resolution to call to trial the thirteen defendants in authorship.

Among the first decisions that the Court took was to define for this Friday, November 24, at 08:45, the trial hearing. The Flores ex judge may have to excuse himself, since he participated in a part of the process: on October 25, he denied the objection filed by the defense of Glas against Jurado.

In the morning, the Office of the Prosecutor in another of Odebrecht’s cases, asked the court to define a date for the hearing to do the charges for the alleged crime of money laundering against Rivera; Tomislav Topic, from the Telconet company, and his son Jan Topic.

The request for a hearing comes from the prosecutor of the Transparency and Anti-Corruption Unit of the General Attorney’s Office, Ruth Amoroso. According to the drawing of the acts, the competence of the process lies with the “Unidad Norte 2 Penal”, of Guayaquil,  Judge Christian Roca is in charge.

The request reaches twelve days after the preventive detention against Rivera, in the case of illicit association, expires and in the absence of a sentence is released. His lawyer Aníbal Quinde says it is clear that if the trial hearing for illicit association goes beyond December 2, his client would remain rooted in the process, but in freedom, which would happen unless the prosecution starts another process,  in which a new preventive prison is ordered.

On August 15, the prosecutor Diana Salazar ordered the Transparency Unit, of which she is the coordinator, to compile all the information in the case through an illegal association related to “Televisión Satelital”, owned by Rivera’s children. Under the presumption of money laundering, a previous investigation was opened.

On July 17, Topic, general manager of Telconet, in the non-sworn version of the case for illicit association, said that Rivera asked him and his company as “commission” for contact with Chinese investors and Odebrecht a series of links for the Satellite Channel. The laundering of assets is sanctioned in article 317 of the Penal  Code in force with a penalty that could go from one to ten years in jail. (I)