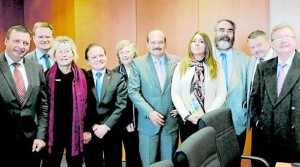 The history of cooperation between Ecuador and Germany on environmental issues is long, more than 40 years. But the origin of political impasses of the past 15 months started from 2007 when the Ecuadorian government launched the Yasuni ITT Initiative. Since then, Berlin laid eyes on the project and decided to increase its environmental collaboration.

Although support for the Yasuni did not materialize, after a period of negotiations, Berlin offered 34.5 million euros to create the Special Program Yasuní Biosphere Reserve (YBR). The funds arrived in February of 2013. And the Ministry of Economic Cooperation (BMZ by its German acronym) added another 10 million euros for the Socio Bosque program and REDD.

According to the Technical Secretariat for International Cooperation (SETECI), 75% of cooperation has been directly or indirectly assigned to environmental issues. Some of these figures are for the Yasuni project. (I)

In nine years, the President has granted nationalization to 43 foreigners