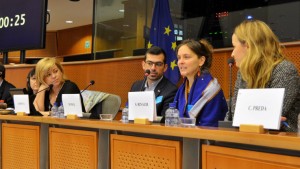 The appeareance of French Brazilian journalist Manuela Picq before the Human Rights Subcommittee of the European Parliament in mid-February did not please the National Government. Through a letter dated March 10, 2016, the Ecuadorian Mission to the European Union questioned the presence of Picq and her allegations against the State on alleged violations of human rights and fundamental freedoms during a series of protests in 2015 .

The delegation defended the state’s duty to ensure the observance of human rights and its authority to safeguard public order. It also criticized the lack of verification by the Subcommittee to the allegations expressed by Picq within the European body in Brussels, Belgium.

Picq, sentimental partner of ECUARUNARI president Carlos Perez Guartambel, was arrested in August last year during one of the protests. Her visa was revoked and she had to leave the country.