The Government of Ecuador denounced this Tuesday an alleged  scam in the Institute of Social Security of the Police  (Isspol), for about  500 million dollars , which could affect the entity’s pension system. 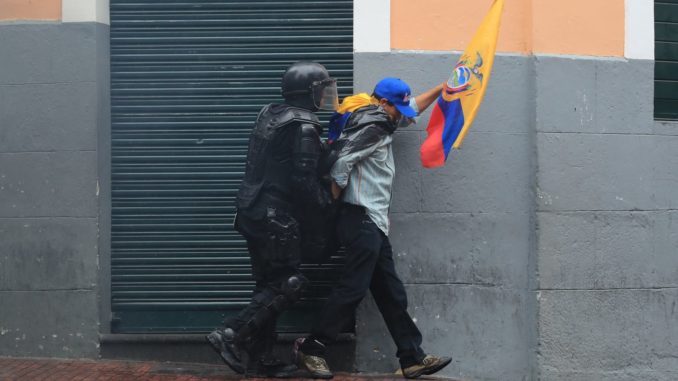 If the money is not recovered, ” Ecuadorian society, the government, the state will have to obtain the necessary resources ” to cover these investments, added Romo.

He added that an investigation carried out by his portfolio and the police entity itself found two types of investment, apparently irregular, for a global amount of  532 million dollars, which, according to the official, represent a “scam to the retirement and pension funds of the Police » .

He explained that the first is a financial operation to obtain liquidity or portfolio restructuring (swap type), in which Isspol had agreed to ” exchange bonds for 327 million dollars of Ecuadorian internal debt” with a private company.

The second operation, as he referred, was developed “over three years in small amounts of purchase of foreign debt bonds”, for an amount that reached 205 million dollars.

Both operations, he said, “were carried out with Jorge Chérrez Miño,” the legal representative of two companies based in Panama who, in turn, had offered that the amount of the transactions would be guarded by the company Depósito y Compensación de Valores del Ecuador ( Decevale).

According to Romo, after the investigations, this type of operation has ended, in which the private company did not give the money to Isspol, but “more papers that are not in the possession” of the Police Social Security Institute.

If the scam is found, “you must comply with the obligations to deliver money to Isspol as a return on your investments,” Romo reiterated, recalling that that institution, at the moment, has overdue payments of more than 100 million dollars.

He also emphasized that “the retirement of the police is guaranteed, because there is a law that obliges the State to ensure the payment of everything owed for these concepts.”

For this reason, he emphasized that with this type of irregularities “not only could the Police have been harmed, but the entire Ecuadorian society.”

“We are not going to allow those resources to disappear,” the minister exclaimed, when she identified a former director of Isspol, David Proaño Silva, as one of the main people involved in the investigation that is still ongoing, because “there is still much to unravel.”

For his part, the current director of Isspol, Jorge Villarroel, complained that he had not received a response from the Decevale company about the investments made by the institution under his charge.

“They never gave us the precise information, generating mistrust and that led to the measures that the legal regulations allow us to be taken,” Villarroel said.

The Police Commander, Patricio Carrillo, said for his part that he will appeal to international cooperation to find the people and the “route of transactions” in this plot of alleged fraud.

“We are not going to rest and we are sure that neither the authors nor the transaction they made can hide,” Carrillo stressed. EFE