The lowest growth of the current government 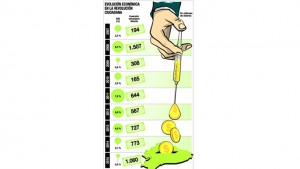 The Central Bank presented the growth figures of the Ecuadorian economy in 2015. According to the institution, the gross domestic product (GDP) rose by 0.3%. The government target was 0.4%.

The figure is the lowest in the history of the self-proclaimed Citizen Revolution. In 2014, the growth was 3.7%. A year earlier it reached a 4.6%.

Despite the records, Diego Martinez, manager of the Central Bank, believes that the country faced the storm well. He said that the government took adequate measures to prevent a decrease.

During the presentation, at the bank’s headquarters in Quito, the official stressed that government spending was the main engine of economic growth. Half of that 0.3% is attributed to government consumption.

The rest came from household consumption and exports.

On the other side there are the GDP components that had negative numbers. Imports are an example. The application of safeguards led to a 6% drop in purchases abroad. Investments also deducted revenues last year.

The exchange rate stamp has a “legal basis”