Ferguson changed the whole line-up and watched in despair as the Rangers team kept United in a tight spot to obtain an important point and throw Group C wide open.

To complete the misery of Ferguson, midfielder Antonio Valencia suffered a serious injury when he broke his ankle in a horrific incident that is going to keep him out for several months.

United was expected to beat the Scottish champions Rangers with contempt, Ferguson’s confidence in his players made him do 10 changes from the side that drew 3-3 at Everton the previous Saturday.

Before the game, Ferguson said to the team they had to respect a club with Rangers’ history, despite the obvious rivalrty between them and United. But Fergie’s player selection went completely against that sentiment.

The United boss made 10 changes from the side that threw away victory at Everton on Saturday by selecting what was, in effect, his Carling Cup team, with the exception of Rooney, Rio Ferdinand, Darren Fletcher and Antonio Valencia. 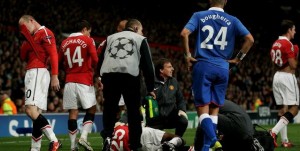 And two minutes short of the hour, Valencia suffered his horror injury when he went over on his left ankle, the players around him immediately sensing the seriousness of the injury, Kirk Broadfoot, the player involved in the challenge, looking distraught.

The game was stopped for five minutes as Valencia received treatment and oxygen. He was taken off on a stretcher, the severity of the injury casting a depressing shadow over what had become an intriguing contest, with Rangers desperately trying to keep United at bay.

Valencia received a standing ovation from both sets of fans as the stricken midfielder departed, to be replaced by Ryan Giggs. Rooney sent a header spinning wide with 20 minutes to go, and there was an inevitability about the outcome as United squandered chance after chance.

Valencia suffered a closed double-fracture of the tibia and fibula of his left leg. He will be on surgery tomorrow and will be away for a period of no less than six months.