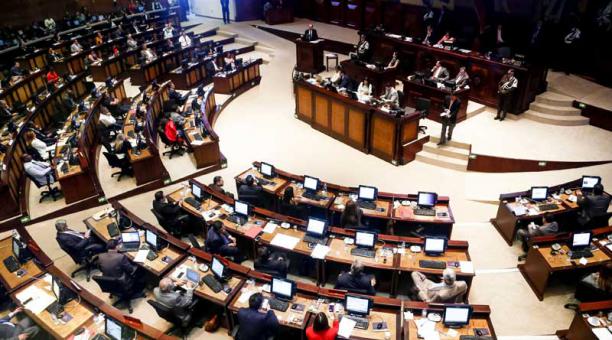 With 128 votes from 131 legislators present, the National Assembly resolved to censor and dismiss Carlos Baca Mancheno as head of the Prosecutor’s Office.

The vote on the motion, presented by the legislator César Rohón (Social Christian Party) was given after a day that lasted for 11 hours. When Baca intervened, he sensed the outcome of the trial. “Nobody is essential in any position. But we are at the moment that we must act as a country. If the political decision has been made, he may cease to be a State Attorney, “he said.

On several occasions he referred to an alleged departure from his position. He listed the actions he undertook in front of the institution. He explained that there are 15 crimes investigated, among which are: terrorism, illicit association, concussion, money laundering, illicit enrichment, embezzlement and others. In a presentation that was projected on the screens of the Assembly, the names of the defendants that belonged to the previous Government and also to the current one were observed.

On the list were former Vice President Jorge Glas; former Comptroller Carlos Pólit; former ministers Alecksey Mosquera, Carlos Pareja Yannuzzelli and Walter Soliz, the ex-manager of the AGD-No more impunity trust, Pedro Delgado, among others. Yesterday was the second time that the now ex-prosecutor faced the House in less than two months. March 9 was to explain the use of an audio.

The recording contained a conversation between the former president of the Assembly, José Serrano, and Pólit, currently a fugitive, to “get off the Prosecutor.” Serrano had disappeared from the political scene from that day until yesterday.

He arrived late for the plenary session and listened, along with 119 legislators, to read the file on the impeachment, which lasted four hours. Shortly after reading, Baca came in to defend himself.

During the two hours of the ex-official’s intervention, Serrano stared at him. The last time both were in the Plenary, Baca held him responsible for having an agreement with a fugitive to get him out of office. That night ended with the dismissal of Serrano and the start of a political trial against Baca, whose outcome had to occur yesterday.

The deputy of the Public Ministry divided his presentation into four parts. In addition to denying an alleged breach of duties, he spoke of the observations at the beginning of the impeachment; He made an analysis of the “real reasons” of his appearance and closed with the position of the Prosecutor’s Office in front of the facts of the northern border.

Days before, Baca warned that he was going to reveal information about the “permissiveness” that occurred on the northern border with respect to the control of drug trafficking. Yesterday, he thanked César Navas, Minister of the Interior, for coordinating actions in the conflict zone, which has cost Ecuador, in the last two months, seven dead and two kidnapped.

Now, he said, eight fiscal instructions are open, six preliminary investigations for the crimes of kidnapping, terrorism, organized crime, illicit trafficking in firearms, among others. At the end of his speech there was no applause.

Baca’s statements, asking the legislators to close their eyes and “abstract” the information to vote against his censorship, did not please Henry Cucalón, Assemblyman of the PSC, who was the first interpellant. “With deep indignation rejection and repudiation that has intended to offend the National Parliament and its members,” he said in his speech.

For Cucalón, Baca’s breach was clear, since he had not prosecuted the audio between Serrano and Pólit before presenting it at a press conference, in which he explained that the conversation was posted on social networks and that he learned through a police report.

The policeman who signed the audio part, Danny Ibarra, appeared at the Oversight Commission and said that this document was made after the press conference and that he was pressured to do so.

While the Prosecutor and Cucalón spoke, the assembly members of the different groups met and discussed possible censorship. Until the afternoon it was commented in the corridors of Parliament the possibility of an agreement to save Baca. But, when the debate was opened, the representatives of the Creo, PSC, independent, Alianza País, Banca de Integración Nacional and Citizen Revolution (correísmo) caucuses had criticized Baca.

Finally, Cucalón also criticized Baca’s assertion that a censorship would give a “wrong message of impunity.” The ex-prosecutor said that a possible sanction could lead to judicial claims to the processes carried out by the institution or that had sentence. (I)