The new Ecuadorian Soccer Federation president will have to solve the problems left by its ex-president, Luis Chiriboga 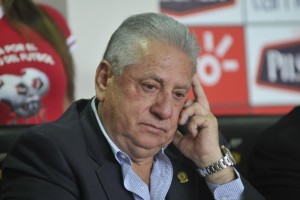 The ex-president of the Ecuadorian Soccer Federation (FEF), is being accused internationally, among other FIFA members, by the US Prosecutor.

What is not known by everyone is the connection that FEF had with the impounded TV channels in Ecuador: “TC” and “GamaTV“. The issues involve the broadcasting rights of soccer games.

The Ecuadorian TV stations are in crisis and don’t have enough funds because the Ecuadorian State is also suffering from an economic crisis. The budget of those TV channels depended directly on the government, who used to pay the rights of those soccer game transmissions. The sporting clubs do not know who are the responsible parties, and doubt who to sue: the government or the TV stations.

There is a fear towards the US government, and that is why the Latin American socialist governments are cautious while being pointed by the United States. Luis Chiriboga might think that he will be free of his domiciliary arrest and that his extradition will not exist because there might be high sphere accomplices; however, if that was true, the government might change in the 2017 elections, and with that, there will no more compromises, and his head will have a price. (I)

Military asked ISSFA not to sell land from the Samanes sector