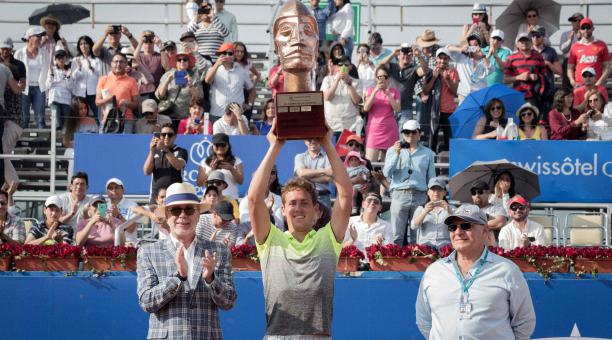 He did not look at any complete match, not even the final, but he keeps a photo with the Frenchman Gael Monfils. Fabricio Valdivieso, general manager of the ATP 250 Ecuador Open, finished the tournament tired, but with a big smile on his face.

“The general supervisor of the ATP, Lars Graff, gave the best organization report, never in my career of almost 30 years have I received so many compliments together,” said Valdivieso, a 62-year-old from Guayaquil.

His happiness has an answer: “In this fourth edition of the Ecuador Open we made history. Never before has a group of players of such hierarchy and quality come to the country. It’s a tournament to remember for many years, “he said. In effect, this edition brought together 4 players ‘Top’ 50, 11 ‘Top’ 100 and was a player who was entered in the classification box who achieved the title.

“It was a tournament where the show prevailed, the fact that we have gathered so many figures did not guarantee that one of them was going to achieve the title. It was the new generation of tennis that gave great surprises. “It refers to the fact that Roberto Carbellés Baena, 23, was proclaimed champion after defeating two favorites, the Spanish Albert Ramos Viñolas, who occupies the 21st place in the world rankings and the Italian Paolo Lorenzi, in the 44th. Carballés is 106th in the ATP and by mistake he did not sign up for the main draw, he came to Quito to find his place and played the qualifying draw.

“The ATP highlights the irruption of this new generation, even organizing a tournament at the end of the season, because there is a lot of quality and a lot of impetus in their game.” Quito was able to watch some of that momentum with players like Andrej Martin of Slovakia, Corentin Moutet of France and Thiago Monteiro of Brazil.

The three were in charge of eliminating players like the Spaniard Pablo Carreño Busta, the Croatian Ivo Karlovic and the French Gael Monfils. “All these results gave the tournament shine, which remains the most important event in the history of sport in Ecuador,” added Valdivieso, who has lived tennis since he was 14 years old. He was an international judge before organizing tennis tournaments in the country.

First he took charge of the Davis Cup series and then of the Challenger Tournaments in Quito, where he made 20 tournaments before making the big step to the ATP 250 Ecuador Open. On the final between two Spanish tennis players, Carballés and Ramos Viñolas, Valdivieso said that at some point it was going to take place, because “each year between five and six tennis players from that country arrive at the tournament.

They already convinced themselves that to play at altitude it is enough to adapt, that is why they come with days of anticipation “. He said that there was a high number of Spanish viewers for the television broadcast of the final game that took place in the Jacaranda. He took this long Carnival holiday to rest, after six exhausting months, to start planning the 2019 event.

“In the last two years the tournament has coincided with these holiday dates, has reduced attendance in the final days, but there is much interest in this tournament; Quito and the country have increasingly appropriated this tournament. ”

As the ATP 250 Director, he will attend several international tournaments to make contacts with players and invite them to play the Ecuador Open. “So we did with several of the tennis players who came this time, one of them Gael Monfils, whom I had not met before, but very humble. He was very grateful with the deal and the fans, who welcomed him with great enthusiasm. ” (I)