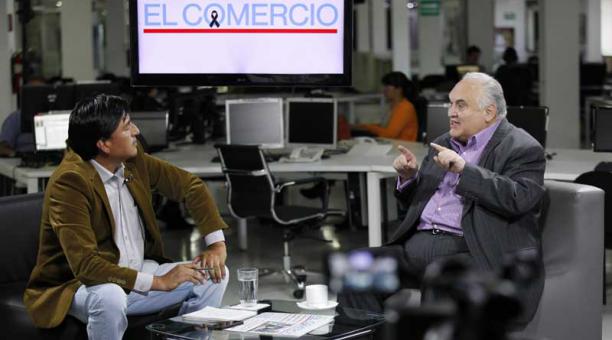 Embezzlement and procedural fraud. These are the two new crimes that the Prosecutor General’s Office also suspects were committed in the kidnapping of Fernando Balda. This is indicated by an office that was prepared by the Attorney General, Paul Pérez.

According to the document, the indications of these crimes were revealed in the investigation due to the plagiarism of Balda, whose fiscal instruction ended last Wednesday. That is why Perez requested this Thursday, July 19, 2018, Judge Daniella Camacho to set the time and date for the trial preparatory hearing. In this proceeding it is expected that the Prosecutor’s Office will issue its opinion against or in favor of the six defendants in the case.

Among them is former President Rafael Correa, on whom the Prosecutor has new elements to accuse him. The Attorney General assured that in the “last weeks” more data of the case have been obtained and for that reason new precautionary measures for the former president, who at the moment has in his against an order of preventive prison will be requested.

Now, the idea is to find a mechanism to prevent the former president from selling his assets in Ecuador. This happens, because on June 18, Correa donated his house in Quito to his son Miguel. The property, located in the sector of Monteserrín, is valued at USD 422 000. The transfer was completed with a power that Correa and his wife Anne Malherbe granted to Pierina Correa, sister of the former president.

This document indicates that the usufruct for life is reserved in favor of the wife of the former head of state. This means that Correa discards property. That donation has been criticized by the Financial Analysis Unit (UAFE). Its director, Diana Salazar, indicated in EXA that Correa’s action is a mockery for the Ecuadorian people. “We have been mocked, the same day that an accusation is filed, (Correa) makes a donation. That is inconceivable, it is unacceptable. ”

For this reason, the Office of the Prosecutor prepares the request for the new precautionary measures. Another action that Prosecutor Pérez has carried out is to order the opening of two preliminary investigations to investigate the new crimes.

These processes will be in charge of the prosecutor Ximena Peña, who has also investigated the kidnapping process. All these new facts have been questioned by Caopolicán Ochoa, lawyer of the former president.

The lawyer in an interview he held on Thursday rejected the actions of the Prosecutor and said there is no evidence that the former president has participated in the plagiarism of Balda. Regarding the two new crimes that will be investigated, Ochoa said he will analyze his defense in due time and criticized that the Prosecutor’s Office does not investigate more complaints, which, according to Ochoa, were the basis of the plagiarism process.

He has also asked the Court for information on whether Balda has legal proceedings against him and if he has a warrant. But the request was denied. This Thursday, Ochoa also referred to the donation of the house to the younger son of Correa. “What is the problem with that? It is a personal decision that anyone has. The former president had no prohibition on disposing of property. All the procedure was legal, no law or regulation has been violated. }”

He believes that the Prosecutor’s request to investigate an alleged procedural fraud is an exaggeration. He thinks the same about the capture order that weighs on Correa. For that reason, he has indicated that on Monday, in the hearing of appeal to the detention, his argument will be focused in which the supposed kidnapping of Balda was not made in Ecuador.

This occurred despite the fact that the former head of state lives in Belgium. Meanwhile, Assemblyman José Serrano spoke Thursday on the leaked recording of a meeting he had with Senain’s ex-agent, Raúl Chicaiza. The legislator admitted that he received the ex uniformed, but said that the information of that audio has been decontextualized.

In addition, he indicated that the Prosecutor’s Office did not link him to the process because there is “no doubt” that he is not responsible for the fact.

The fiscal instruction of the Balda case was closed on Wednesday, after four months of investigation. In the list of accused are the former Secretary of Intelligence, Pablo Romero, former police commander Fausto Tamayo, three agents of the Senain and Rafael Correa. (I)