The stop in Mirador will reduce investment 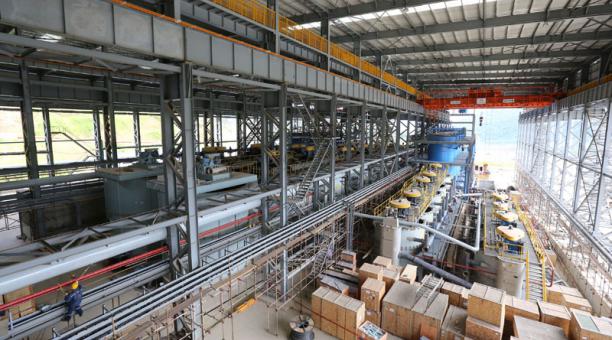 Dozens of Ecuadorian and Chinese workers, dressed in blue uniforms and white helmets, walk through the metal structure that is the heart of Mirador, the first large-scale open-pit copper project in Ecuador.

It is the Benefit Plant, a three-story building that will house mills between 7 and 10 meters high, which through flotation and milling processes will extract from the rocks the copper that the Chinese company Ecuacorriente (Ecsa) discovered 18 years ago in the Tundayme Amazonian canton, in Zamora Chinchipe.

The mine is still being built and there is no access to the press to know that area. Building it will cost a total of USD 1 439 million. The company had planned to start extraction tests in 2019, but the schedule is delayed and the investment amounts planned for this year will be reduced. This is due to the fact that last March the Ministry of Environment (MAE) suspended 40% of the activities in the project due to finding 31 environmental breaches.

This year, Ecsa expected to reach USD 1 115 million of investment, but due to the stoppage the amount will be reduced by USD 83 million. The president of Ecsa, Hu Jiandong, adds that while there is no certainty of a date to resume activities 100%, the company will keep waiting for investment in another field, for which they also have a concession: Mirador Norte.

For this to pay USD 16 million less taxes this year, explains Ge Shifeng, vice president of the firm. According to the MAE, the work could return to operate 100% in December. Jorge Jurado, Undersecretary of Environmental Quality of the Ministry, tells that in the remediation plan, presented by Ecsa and approved in May by the MAE, it is detailed that in December the 31 observations will be corrected, and only then will the work be allowed it is fully reactivated.

Until June 6, according to the last inspection, 18 points had been corrected. Among the outstanding breaches to be remedied are the revegetation of slopes, the transport of material without protective cover, the improper storage of fuels, the maintenance of machinery in unauthorized sites and the rehabilitation and revegetation in affected areas.

“They set the deadlines to correct the problems that does not depend on us, “says Jurado. One of the suspended areas is the construction of the Tundayme relavera, a pool that serves to store the sediment that remains after extracting the mineral.

Marisela Argudo, coordinator of the environmental area of Ecsa, explains that the observation of the MAE is that they do not have the approved designs for this construction. But she maintains that they started the work because they received approval from the Mining Regulation and Control Agency (Arcom). The other relavera, called Quimi, will be finished by the end of this year. Tractors and heavy machinery remove the earth to build the walls of this pool that faces the river with the same name. Quimi will meet the needs of the test production process. “If up to that point you cannot use the Tundayme relavera we will have problems in the real production,” says Shen Quiong, vice president of Ecsa, in charge of environmental issues.

Quiong recognizes that when the works began, in 2016, they had environmental management problems because they did not adequately control the operations of 30 contractors and subcontractors that intervene in the concession. Although they presented the remediation plan, they do not share several MAE criteria.

Quiong cites the observation of the construction of tailings. “They asked us for a tailings design, and we presented it to the MAE, but later they said that a modification is needed. We believe that the design is within what the license says. ” The president of Ecsa expects high level officials to visit the project to explain “that it is not a chaos as they do from the outside”. The executives of the Chinese firm highlight what has been raised since 2015, especially the plant, but also the camp in which 440 employees live. It is an area with a complex tourist complex. There are soccer and basketball courts, palm trees, paved streets, lights, villas with televisions, Wi-Fi and hot water.

For 30 years, Ecsa will remain in this area near the Cordillera del Cóndor, which is part of the 2 985 hectares that the Government gave them in mining concessions. (I)

Tomatoes are ready to travel to the United States; avocados wait