There was a ‘variation’ in equity of 21 Ecuadorian legislators, according to analysis 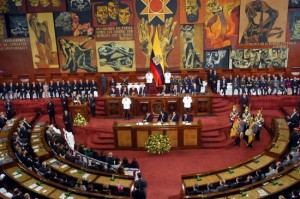 Most Assembly members who decided to disclose confidential information reported an increase in their assets between 2013 and 2015.

Of the 29 parliamentarians who collaborate with the Legislative Observatory, a transparency initiative, 21 handed over their property declarations during the beginning and the middle of their functions. This enabled the organization to prepare a “comparative analysis” so that citizens review this and, if necessary, report “illicit enrichment,” said the director of the Observatory, Marcelo Espinel. This assumption is the responsibility of the Comptroller.

In the group of 21 assembly members, 17 increased their assets, and 4 reduced them.

Rafael Correa warned to close the Montufar school, after protests