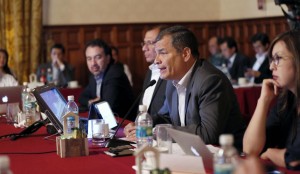 In the Government Cabinet that takes place today in Lago Agrio there will be familiar faces with new functions, and others will no longer be part of that circle. Yesterday, through Executive Order 834, President Rafael Correa made changes in the portfolios of Communications, Labor, Tourism, Sport and Environment. This is the third time in less than two months that the government makes adjustments in its ministries. Last week it did in the portfolios of Health and Hydrocarbons. In October the same happened with the holders of Senplades, the Secretariat of Public Administration, Tourism and the Coordinating Ministry of Production.

On this occasion, one of the most important movements is the one that occurred in the National Secretariat of Communication, when Fernando Alvarado Espinel took his office from the June 23, 2009, thus becoming one of the officials who has spent more years in front of a Secretariat. Six years later, the baton of this institution -which is responsible for design, direct, coordinate and implement policies and strategies for communication, information and dissemination of the government- will be Patricio Barriga.

He will cease to be Chief Executive at the Council for the Regulation and Development of Information and Communication (Cordicom), a position he occupied since July 2013. In his place will be the current secretary of the President, Omar Simon, who was president of the first National Electoral Council, though this movement is not on the executive order. Therefore, Alvarado will preside the Ministry of Tourism that was in charge of David Parra.

Another Portfolio that has a new holder is Labour. Carlos Marx Carrasco, who occupied this space since March 2014 will be replaced by Leonardo Berrezueta. The Governor of Azuay until yesterday was also the private secretary of the President and Deputy Minister of Security of the Ministry of Interior. Carrasco used his Twitter account to thank the President for allowing him to be part of his team for nearly nine years.