During most of the year Ecuador was present in the ‘last minute’ broadcasts of the news of the world and in the digital covers of the media for events that transcended the national news. 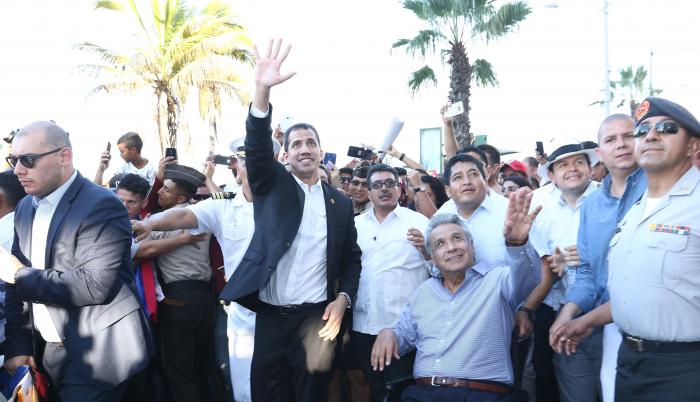 In January, the Lenin Moreno Government announced that it would analyze the issuance of special permits for Venezuelans to enter, a decision that materialized in August under the figure of a humanitarian visa.

A month later, Moreno received the newly self-proclaimed president of Venezuela, Juan Guaidó, and said he was willing to help the country “return democracy.”

Julian Assange was arrested in London after the country took away his political asylum and Rafael Correa criticized from Brussels the decision of Justice for linking him to the Bribes case.

In September, Twitter unveiled the use of fake accounts by Alianza PAÍS and in October protests over the rise in fuel were counted in foreign media for more than 10 days.

A visa for the entry of Venezuelans

On the night of January 19, a Venezuelan citizen murdered a pregnant woman, with whom he allegedly lived, amid the shock of police and residents of Ibarra who witnessed him live.

The next day, the authorities covered their eyes in the case of sexist violence and decided to take measures to control the entry of Venezuelans.

“Ecuador is and will be a country of peace. I will not let any antisocial take it away from us. I have arranged for the creation of brigades to control the legal situation of Venezuelan immigrants in the streets, in the workplace and on the border. We analyzed the possibility of creating a special permit to enter the country, ”President Lenín Moreno wrote in his Twitter account.

The Government began asking Venezuelans for a criminal record certificate to cross the border and the news was on the front pages of the most important media in the world.

At the end of March, the provision was suspended by decision of the Constitutional Court.

However, on August 26 of this year, the Government put into effect the requirement of a “humanitarian visa”, news that also occupied a space in the international press.

In the midst of the migratory crisis and the flood of Venezuelans trying to cross the Colombian-Ecuadorian border, the interim president of Venezuela, Juan Guaidó , visited Ecuador at the beginning of March at the invitation of Lenin Moreno.

Guaidó, who had a month as president in charge, began a tour of several Latin American countries despite the fact that the Supreme Court of Venezuela had issued a ban on leaving the country for allegedly usurping the functions of the president.

However, his visit to Ecuador had international relevance because it was the country from which Guaido announced his “return home” and put a date on the new mass protests against Nicolás Maduro .

“I return to Venezuela and on Monday and Tuesday we will call for protests,” said the president in charge from Salinas and his phrase was replicated on the digital front pages of the media.

The new mobilizations, said the president of the Assembly, would also be aimed at Venezuelan public employees, to whom he would call “not to continue cooperating with a torture regime.”

During the visit, Lenín Moreno told him that Ecuador would be willing to help “finally in Venezuela return freedom and democracy.”

The Government withdraws asylum from Assange

Ecuador rose on Thursday, April 11 with the news that the Government of Lenín Moreno had made the decision to withdraw the asylum to Julián Assange .

The founder of Wikileaks , who was under the protection of the embassy in London since 2012, was arrested by British police after Ecuador also suspended his nationality due to “his repeated violation of the norms established in the inter-American conventions on diplomatic asylum ”, According to the Ecuadorian Foreign Ministry .

The departure of Assange, which occurred during the early morning of Ecuador, was captured by British media and the video of his transfer to the police vehicle went around the world in a few seconds.

“No one is above the law,” said the British Prime Minister Theresa May minutes later, referring to the Australian’s detention.

President Moreno, meanwhile, published a tweet at 04:30 in which he said that Assange was not going to be delivered to any country where he could suffer torture or death penalty.

In June it was learned that London had signed its extradition order to the United States, where it faces 18 charges for the dissemination of secret material.

The Assange extradition hearing is scheduled for February 2020.

Belt, linked to the Bribes case

The state attorney general, Diana Salazar , asked on August 7 for the order of preventive detention against former president Rafael Correa for his alleged participation in the Bribes case.

The Prosecutor’s Office said that he had a series of indications that linked Correa and other former officials of his Government to bribery, influence peddling and illegal association that amount to up to 15 years in prison.

The former president, who has resided in Brussels since 2017, told international media that he would believe that Ecuadorian justice would try to convict him for bribery to prevent him from returning to the country and participating in politics.

“We will not be surprised if they call us on trial, condemn us, because that is what they expect, a bribery conviction, for example. That does not prescribe, ”he said from Belgium.

“In Ecuador there is no rule of law,” he said.

Three months later, in November, his name appeared again on the digital and paper covers of the international press.

A set of 1,019 accounts linked to the PAIS Alliance party were eliminated by the Twitter social network in mid-June.

News agencies echoed the statement, released in September, in which Twitter also revealed the suspension of accounts in Spain, Saudi Arabia and Hong Kong. The network in Ecuador was largely made up of “false accounts that were mainly dedicated to disseminating content about the administration of President (Lenín) Moreno, focusing on issues related to Ecuadorian laws on freedom of expression, government censorship and technology”.

The platform reported that the tactics most used by the accounts linked to the president were hashtags manipulation and spam forwarding.

From its official profile, AP decoupled from accounts deleted by Twitter, denying that “it has created or financed support accounts or trolls for any cause.”

However, it was not the first time that an irregular use of this social network was detected by the president’s account.

In January 2018, a New York Times investigation revealed that a Moreno adviser acquired tens of thousands of followers and retweets to boost the president’s election campaign in 2017.

The protests that ignited Latin America

Quito was the epicenter of protests in October to curb the package of economic measures agreed with the International Monetary Fund , among which were the increase in the price of gasoline.

“Crisis in Ecuador,” the BBC titled on the second day of protest, while Le Monde (France) and DW (Germany) gave figures of dead and wounded, supported by data from international agencies.

In Spain, on the other hand, Ecuador’s ambassador, Cristóbal Roldán, gave interviews with reassuring messages to the largest Latin American migrant community in the country.

The indigenous uprising in Ecuador was the starting point for a series of protests that ignited Chile, Bolivia and Colombia.

“Countries have collided and social unrest has not stopped growing,” said the Spanish public.

During the protests, Lenín Moreno decreed the state of emergency and moved the government headquarters to Guayaquil, given the threat of the natives to reach Carondelet .

The ten most purchased appliances in Ecuador during 2019

This Government asks Google to delete more content than Correa