Three informants revealed details of the kidnapping of press team 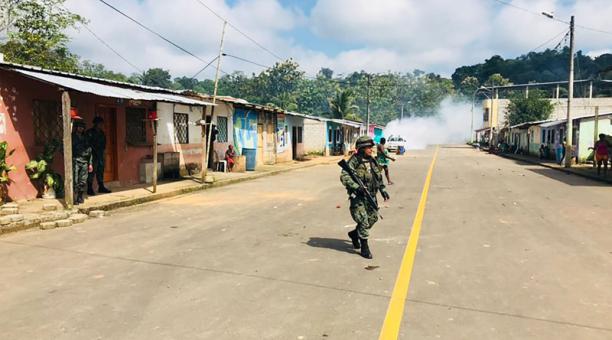 New details are known about the kidnapping and murder of Javier Ortega, Paul Rivas and Efraín Segarra. During the investigation, the Colombian Prosecutor’s Office collected the versions of three people. Their stories coincide and with those details Colombian investigators identified the militiamen who led and participated in the plagiarism in Mataje and the subsequent crime.

One of the witnesses said that around 10:00 on Monday, March 26, three men were seen while being taken from a two-story house, located in the Ecuadorian town of El Pan, where they had been taken. With them was alias ‘La Pica’, a militiaman from the armed group Óliver Sinisterra.

He put them in a van, inside which were three other armed. The group went to an area called La Mina and “from there started a boat with the three people who had collected in El Pan”. Until then, the witnesses did not know that it was the press team.

That same day, in the afternoon, 24 men and women were guarding a farm in the Colombian Las Brisas, in Tumaco. The one who controlled the site was alias ‘Pitufo’, a second ringleader of the illegal group, after alias ‘Guacho’. ‘Smurf’ ordered that all be formed.

The militiamen witnessed the arrival of the three and noticed that they were guarded by alias ‘Cherry’. He handed them over to ‘Smurf’, who received them with these words: “From that moment on they become prisoners of war.” There, all the militiamen learned that they were journalists and the driver of this newspaper.

There is no coincidence about the time the captivity lasted, before the crime. But the witnesses agree that during the kidnapping, the journalists were taken from one village to another and that they even hid them on farms owned by people who collaborated with the FARC. One of the sites is in Quejuambi Feliciana, a town in Tumaco.

From that point they were transferred to a nearby area called La Corozal, where the family of alias ‘Reinel’, now detained, lives. Just in front of the house of ‘Reinel’s brother’ was a two-storey wooden house, which was abandoned. In that place they stayed three nights. Then they left for another border town in Colombia called Azúcar.

There, the three were hidden in the house of another family linked to the drug trafficking business. In that place one of the videos that constituted the proof of life of the team would have been recorded. In the video they appear chained. And who bought the chains was identified with the alias of ‘El Loco’, a man of about 50 years, who has links with the mafias that make cocaine in the sector of Llorente.

Alias ‘Pitufo’ ordered that they buy the chains in that Colombian area. This militiaman was the one who instructed Javier Ortega about what he should say in the video. A few days later, the professionals and their custodians moved 3 kilometers to a coca-growing area and there they slept two nights.

Between April 7 and 10, the custodians were ordered to take the journalists back to Quejuambi. On the site were alias ‘Smurf’, ‘Gringo’ (third ringleader), and ‘Macri’, another boss. The journalists and the driver were loaded into a boat along with three armed.

In another boat there were more militiamen. With them was also a fourth kidnapped. One night, while it was raining, the militiamen lit a road in the jungle with lanterns. When they arrived at a site, in Los Cocos, alias ‘Gringo’ ordered that the three workers of this newspaper remain there.

The witnesses said that at that moment they were murdered. They shot ‘Gringo’, ‘Macri’, ‘Chuky’, ‘Peru’ and two others that have not been identified. Then a boss ordered to collect the bodies. At 1:00 PM on April 11, four bodies were taken to the hall of the Community Board of Puerto Rico, in Colombia. The population saw that hours later they were loaded into two vans and taken away. The fourth victim, according to one witness, was ‘Guacho”s cousin. One of the informants located the site where they were buried, due to the numerous presence of armed. (I)