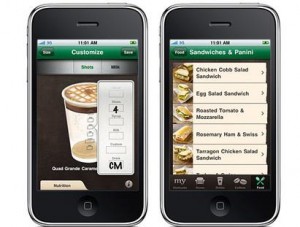 Today, Starbucks inaugurated its new technology to buy lattes. Shoppers now can swipe cellphones instead of credit cards to make purchases.  The 6,800 stores the company operates in the United States and the 1,000 that are in Target stores are able to pay with their smart-phones as: BlackBerry, iPhone and iPod Touch. The customers only have to download  the free Starbucks Card app and hold their phones in front of a scanner at Starbucks cash registers. The money would be subtracted from their Starbucks account, which they can load with credit cards or on iPhones, with PayPal funds.

Starbucks says that more than one-third of its customers use smart phones. “We’re providing them with the fastest way to pay,” Brady Brewer, vice president for the Starbucks card and brand loyalty.

Various technology and payments companies, including PayPal, Bling Nation, Square, Venmo are experimenting with ways to wean Americans off cash, credit cards or both; however the introduction of mobile payments in Starbucks stores is the most mainstream example yet.