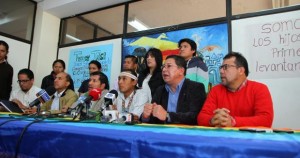 The Unitary Collective of Workers, Social and Indigenous Organizations prepare for the first march convened for today at 16:00 in the Social Security Office, located in the north of Quito, and will march towards the National Assembly and later the Ministry of Labour as a measure of protest to the silence of the Constitutional Court on the claim of unconstitutionality of the Labor Justice Act and against the laws of Inheritance and Capital Gains, temporarily removed by President Rafael Correa.

The Labor Justice Act, approved last April, has three claims of unconstitutionality, the first was submitted by the Popular Unity Movement; the second by retirees and the Center for Defense of Human Rights (PUCE); and the third by the Defence Committee of the IESS.

The leader of the Confederation of Indigenous Nationalities of Ecuador (CONAIE), Severino Sharupi, said they will not stop the protests against the government although Pope Francis comes in July.