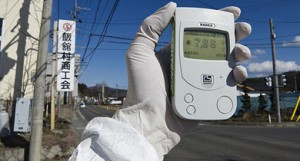 The plutonium discovered yesterday in five soil samples obtained from the Fukushima Daiichi facility presented low radioactive levels. However this does not poses a health threat, informed Sakae Muto, vice president of Tokyo Electric Power Co. Meanwhile the workers at the Daiichi plant are trying to restore its power to restart the cycle of cool water around nuclear fuel rods and avoid its overheating.

Last Monday the officials of the plant said that contaminated radioactive water was found below ground level in one tunnel. New concerns arise since it could spread into the soil or out to sea, which is less than 200 feet away. The radiation levels found in the tunnels were similar to those discovered in the water pooled in the turbine rooms adjacent to three of the six nuclear reactors in the Daiichi plant.

The highest levels are above the 1,000 millisieverts per hour, which were found outside the second reactor. The radiations levels in the other two tunnels were much lower. Experts are trying to determine how the water leaked out. Japan’s chief government spokesman, Yukio Edano, informed that the government will do everything to bring set those problems under control and minimize the impact on human health.

The Oprah Winfrey Show Ends On May