Unionists from Guayaquil finalize details for the march of November 19 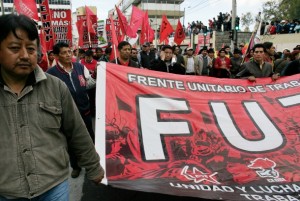 The unions grouped in the FUT anticipate that the labor amendment will mean the end of unionism, job security and the collective agreement.

For the 19th of this month, trade union organizations grouped in the United Workers Front (FUT by its Spanish acronym), plan to mobilize to demand the adoption of the Labour Code, which was introduced in the Legislature two years ago. This was stated by Eduardo Ortega, President of the Democratic Federation of Guayas.

For this reason, a group of union leaders met yesterday afternoon in the premises of the Electricity Company Committee, in Guayaquil, to finalize the details of the march. They planned how to summon the largest number of workers looking for what they held as “respect for labor rights”.

One of the issues to be addressed in the planned march of November 19, would be the subject of unified basic salary, which should be considered in accordance with the basic family foodstuffs. Another, the amendments to the Constitution, in relation to the public sector, which would no longer be under the regime of the Labor Code but of the Organic Law on Public Service.

At the discretion of Ortega, these reforms violate the free organization of public sector employees and it goes against the resolutions of the International Labor Organization (ILO) in its Sections 87 and 89.

President Rafael Correa announced that on November 15, he will present in a concentration in the 9 de Octubre Avenue, the reforms to the existing Labor Code.