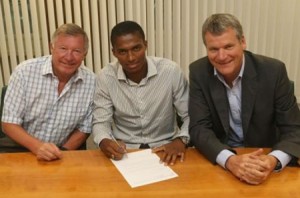 Sir Alex Ferguson, coach of Manchester United stated today, Friday, that Ecuadorian player Luis Antonio Valencia might recover from his ankle injury in time to play the finals on February.

“One can never be a hundred percent sure with this kind of injuries, but we hope he comes back for the finals in February, better than we hope on Tuesday”, expressed the coach of the “Red Devils” during a press a conference.

Since Valencia’s injury is similar to the one Alan smith suffered in 2006 and he had to wait seven months before going back to the game field. Many consider that the Ecuadorian player absence can prolong to April or May.

Ferguson assured that this Friday the doctors report is much better than expected although he recognized it’s hard to loose a player like Valencia during such a good period of the season.

“It’s a bad blow to loose good players, but in the context type of template that we have, we must be able to manage to cope with this”, Ferguson pointed out in a press conference prior to the fifth day of the English league that will be played against Liverpool.

The couch talked about of the surgical intervention that Valencia was submitted this Wednesday during the afternoon. Ferguson commented the success of the surgery. He also pointed out that the tibia fracture was clean and that was their biggest concern for the team, but Valencia’s left ankle has a damaged ligament.

Although Valencia´s crash with the Glasgow Rangers left him absent for several months. Ferguson assured that the entire workforce would have positive benefits for Valencia.

The coach of the “Red Devils” said, “Valencia is strong and positive kid, and that helps on these situations”.

Ferguson affirmed that they have good players to go on this Sunday match against Liverpool. “Having players like Nani, Ryan Gigs y Park Ji-sung, besides Gabriel Obertan and Bebe this means we got some options.”

Luis Noboa Running for President of the Barcelona Sporting Club