BREAKING NEWS
Vehicles may only transit one day per week
Coronavirus: Unions and groups demand the departure of Paúl Granda from the IESS
Ecuador supports US initiative for a transitional government in Venezuela
The Ombudsman’s Office asks President Lenín Moreno to dismiss Paúl Granda
Correistas ‘trolls’ work to return to power and have impunity
Music: Elvis Crespo talks about his love song for Guayaquil
Cocoa and pitahaya, with problems to export
President Lenín Moreno extends suspension of the working day until April 12 and there will be no classes this month
The payment of the family protection bond for the health emergency began
Relatives of deceased from covid-19 do not have to approach agencies to register deaths 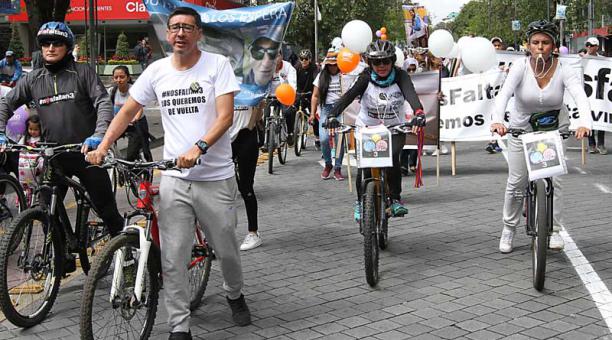 A banner with the drawing of a broken heart and the names of Paul Rivas, Javier Ortega and Efraín Segarra led the demonstration. “We have three left! Come back now! “, Shouted nearly 200 people, while riding on bicycles, on skates and on foot the 3 kilometers that separate the Plaza de los Presidentes, in La Mariscal, from the Cruz del Papa, in La Carolina Park, in the north of Quito.

“We are still in the fight. We are pressing the authorities to achieve their soon return, “said Christian Segarra, son of the plagiarized driver. The demonstration, organized by journalists, was also a symbolic act.

The participants dressed in white and carried balloons of the same color tied to their bicycles or in their hands. With this they sought to send a message of peace for the country and hope for the families of the three captive Ecuadorians. According to Segarra, in recent days there has been no further information on the status of their loved ones. “The only thing we know is that negotiations are going ahead, that the authorities are working to free them,” he said.

From April 9th, 2018, the relatives will travel to Guayaquil, Santo Domingo and Cuenca, where they will spread the message #Nosfaltantres, a phrase that brings together all the acts of solidarity. For Ricardo Rivas, brother of the photographer, these acts allow to demonstrate that “we are united and we are not going to tire until we have them back”.

During the tour, the relatives received the support of the residents of the capital, who shouted phrases such as: “We are with you!” Or, simply, they played the car horns and raised their thumbs. Upon arriving in La Carolina, protesters gathered around the Pope’s Cross, then marched on the athletic track. In the same place was the mayor of Quito, Mauricio Rodas. “We must be in favor of peace and fight as a city for these three children, three parents and three brothers to return,” he said.

The Mayor took advantage of the presentation of a campaign to reduce harassment and sent this message. In this event balloons were delivered with the phrase “#Nosfaltantres “. After noon they were thrown into heaven. On April 8, 273 journalists from Latin America, who belong to the Balboa program, expressed their concern about the situation of the professionals. “Their lives and the tranquility of their families cannot be an element of negotiation,” they said.

The newspaper team of EL COMERCIO was kidnapped on March 26, after entering Mataje. The idea of this incursion was to raise information related to the violence that is lived after the attacks in San Lorenzo. (I)