William and Kate Said I Do 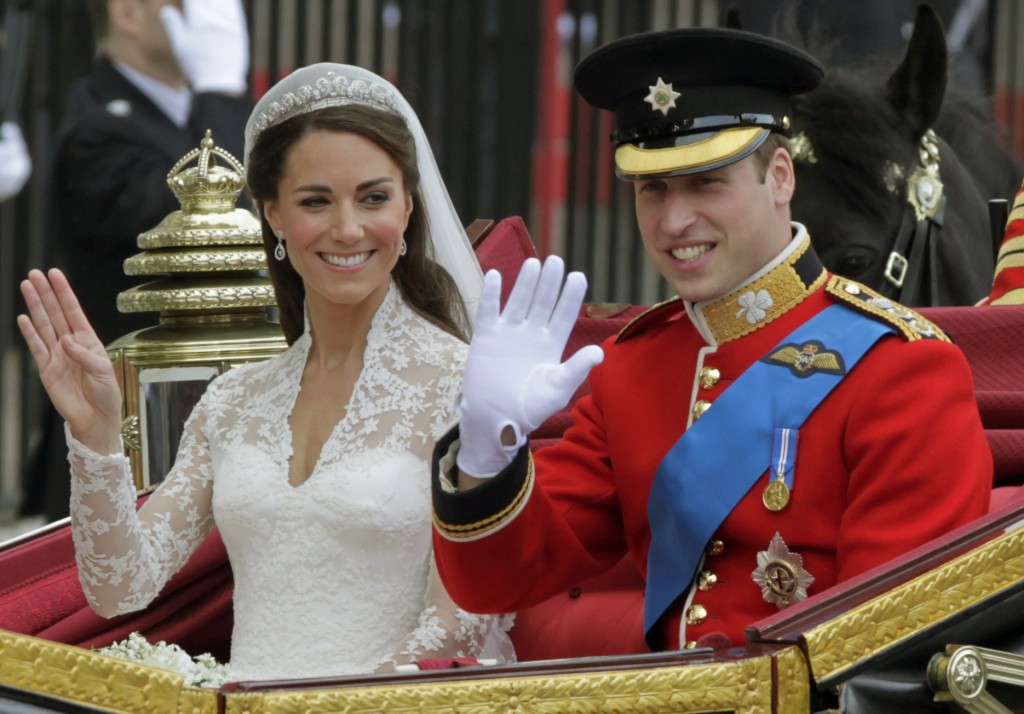 Members of foreign royal families, politicians, diplomats and prominent entertainment figures such as Elton John and soccer player David Beckham were among the 1,900 guests who attended the Westminster Abbey today to witness the wedding of the year.

The bride, Kate Middleton, arrived at the altar with her father, wearing an ivory gown designed by Sarah Burton, the creative director of Alexander McQueen firm, the late British designer. The dress had a slight “V”-shaped neck, an open flower skirt and a two meters and 70 centimeters tail, which was held by her sister and maid of honor, Pippa, while walking down the aisle to William, who was at the end of the red carpet.

Accompanied by his brother and best man Harry, Prince William received Kate wearing the scarlet uniform of the Irish Guards, of which he is honorary Colonel, and also wore the blue sash of the Order of the Garter. When the groom saw his bride, who wore her hair loose and a 1936 diamond tiara, William was blown away by her beauty and he could only say “you’re beautiful.”

The Archbishop of Canterbury, Rowan Williams, was asked to marry the royal couple. Kate promised to “love, comfort, honor and keep” William. After the couple said “I Do”, the children’s choir of Westminster Abbey and the Royal Chapel of St. James Palace and the London Philharmonic Orchestra brightened the ceremony with music by Bach, Elgar, Vaughan Williams, Maxwell Davies and Whitlock.

William and Kate left the temple as the Dukes of Cambridge after Queen Elizabeth II granted her grandson this title, the highest rank in the British nobility. The newlyweds arrived at the palace from the abbey in the “State Landau”, a bare carriage drawn by four horses surrounded by an excited crowd and thousands of British flags.

The event concluded with seven low-flying aircraft of the Royal Air Force on Buckingham Palace, where thousands of people, British and foreign, shouted wildly after the two kisses William and Kate gave each other at the balcony of the Buckingham Palace.

Kate and William’s wedding cake, was made ​​by Fiona Cairns, who designed a fruit cake of several floors, decorated with cream, powdered sugar, and over 900 leaf and floral touches, topped with the couple’s new cipher. In addition, Prince William especially asked for his favourite chocolate-cookie cake for the noon’s reception, it was prepared by McVitie’s Cake Company with a recipe that has been used for generations in the British royal family.
The couple did not want gifts from strangers and in March, they created a solidarity fund to collect donations from those who want to commemorate the marriage. The fund will finance the work of NGOs working in five cases chosen by the couple: bullying prevention, palliative care for children, care for the Armed Forces and their families, environmental protection and promotion for sport and the arts.

Crowds Came to the Vatican for Beatification