BREAKING NEWS
Fashion with social impact is created in workshops in the country
Release of fuel imports will affect air tickets
The 30-S evidenced the manipulation of justice in the time of Correísmo
Ministerial agreement would enable the Ecuadorian fishing fleet to fish for giant squid
Ecuador has granted 44 051 humanitarian visas to Venezuelan citizens
Prosecutor’s Office denounces a death threat against the judge who is prosecuting Jacobo Bucaram
What are the crimes that Jacobo Bucaram is linked to?
Richard Carapaz arrived in 22nd place and was the best Latin American in the World Cycling Championship; Jualian Alaphilippe was proclaimed champion
Epidemiological week ended with a considerable decrease in infections
Shrimp and banana shipments to China decline

With greater tariff, the shipping business is agitated 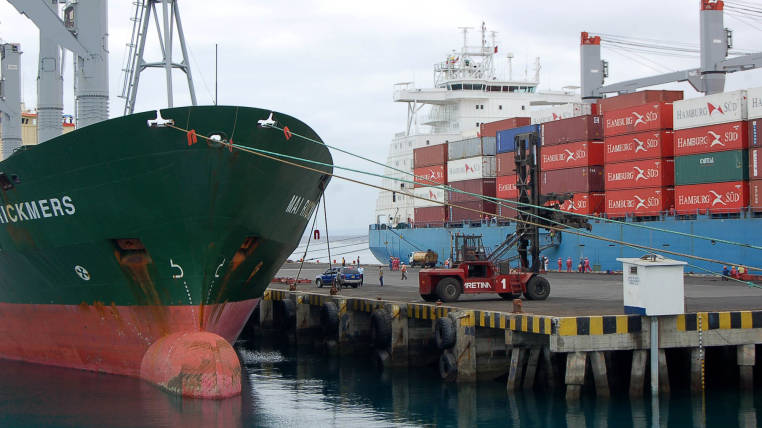 Guayaquil, which moves almost 94.5% of the import cargo, will feel in its ports the greatest weight of tariffs that will be imposed on 375 consignments.

The shipping lines are already thinking about battling against that in their financial books. This restriction makes them think about the effects they already experienced in the safeguard period (previous government): restriction of demand and with it a fall in their load levels.

In the previous restriction policy, the shipping business was reduced by 30%. This year, when a tariff increase is announced, the hope is that the damage will not have the same impact. However, “at the end of the day, we are going to have an effect and that is something that we did not anticipate”. This is stated by Jorge Dávila, an executive of Maersk Line, the largest shipping line in the world for moving containers (16,000,000 TEUS) and which has been present in Ecuador since 1994.

This announcement, says Dávila, was not what they expected, especially when the industry is in the process of getting back up and recovering profitability, which has also been reduced due to excess capacity in the world market. Restricting imports, he says, is to reduce demand and thereby stop occupying all the available space they have for loading.

Emilio Aguiar, former president of the Chamber of Shipping of Ecuador (Camae) and manager of Tecnisea, mentions that container loading is the most affected, as it is the most demanded nationwide. The private ports and the state Simón Bolívar of this city, as well as those of Manta and Puerto Bolívar, move almost 9 million tons of imports per year, of which more than 8.3 million enter Guayaquil.

“The effect we had on the safeguards will be repeated”

How does Maersk take these changes that are being promoted in the country and that will have an important effect on the commercial sector?

Normally Maerks has been a company that has always been behind the scenes. But for us it is super interesting to make known our point of view in a country like Ecuador, which today is so sensitive to the opening of imports. Maersk is a company that will always support any type of agreement that facilitates and frees trade, because that also generates greater production and growth in a country.

But it is already a fact that imports will be restricted again. How do you take this?

For us, what is coming is a little more of the same, but with a different name. When talking about increasing the tariff rates for certain products, we cannot stop thinking about what happened with the safeguards. The moment we put some kind of tax rate on the products, we immediately feel it.

And what was the effect felt by the industry at that time?

Prior to safeguards, the industry mobilized between 9,000 and 9,500 TEUs (equivalent to 20-foot containers) per month. But after this measure entered in March 2015, in the first year, we already had an effect: That load was reduced up to 20% and, until June of last year (when the measure was lifted), up to 30% less.

Having less charges, how does this affect the business of the shipping companies?

We have the asset and we need to fill it. If you get on an airplane and see that only half of it is occupied, then it is a very high operating cost. The same goes for the shipping companies. Maersks costs between $ 2,000 and $ 2,100 on average to move a container around the world, a cost that is not profitable if there is excess capacity in the market. What has already been happening in traffic from Asia to the west coast of Latin America, a rate that a month ago was around $ 2,500, today is $ 400.

Does it have any kind of effect on your investments?

At the end of the day, limiting the import will not only generate less consumption or make the products more expensive, but will make the market less trustworthy. On the one hand, we see that a strong and fairly consistent foreign trade policy is promoted in the sense of wanting the country to sell itself as a destination in which people come to invest, but on the other hand there are policies like these. What are we saying to people? Come and invest in Ecuador, but when you come, this is what can happen to your products.

“The container line will be the most affected”

Emilio Aguiar, former president of the Chamber of Shipping of Ecuador (Camae) and manager of Tecnisea, has experienced two of the complicated times for the sector: the new economic order of the shipping companies and the safeguards and other restrictions.

Have you measured the impact of the announced measures?

Any restriction decreases imports; the affectation would not be to a number as it was in previous years, to 1,300 games; now we are talking about 300 and something, and selective teams. The impact will be less as the Government places higher tariffs, restrictions, impositions, quotas. This will always mean a decrease in imports and will affect foreign trade.

During the measures applied by Rafael Correa, what was the impact?

There was a decrease at the beginning between 30 and 40% of the movement of imports, because there was an impact on heavy vehicles and equipment. They were subject to tariffs beyond normal and in addition to quotas.

By their weight these products have greater weight in the shipping business?

Everything that matters Ecuador necessarily comes by sea. You have to analyze the products.

Is the freight of vehicles, by its weight, the most important in relation to white line?

Freight levels are different for containers, bulk; in payment of freights, the most precious and moving cargo will always prevail: containers. To the extent that the affected products are susceptible to ‘containerization’, the decrease will be reflected in this aspect.

What percentage of the imported cargo comes in containers?

We do not have an exact calculation, but we must take into account that large volumes are also in bulk: grains, cement, you cannot make an exact comparison because one is measured by tons and the other by units.

All white line cargo, phones arrive in containers, what else?

In previous years, situations like these generated dismissals in all companies in the sector or related?

There was before that a reduction in the mass of workers, but in function of the greater mergers of lines and, therefore, there were small companies that disappeared and left only the large merged companies or multinationals where the company was optimized resource, they work according to technology. This has a more important effect than what originated from the lowering of the load.(I)