Yaku Pérez: ‘I am not a supporter of violence; I am adept of a resistance ‘

What claim to the TCE?

This challenge has to do with opening only 31 of the 20,050 ballot boxes presented. We recovered 612 votes. There the fraud of the National Electoral Council (CNE) is revealed. There is a higher instance such as the Contentious Electoral Tribunal (TCE) and there we are going to recover the votes. 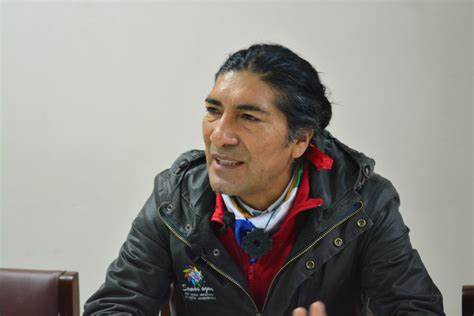 Yaku Pérez: ‘I am not a supporter of violence; I am adept of a resistance ‘

What if the TEC does not give them the reason?

The difference between Guillermo Lasso and our bid is narrow, will ultimately deplete. If the ECA does not open the polls, we will be facing a ratification of the fraud. In the New Testament in the book of John, chapter 30, verse 5, it says: the truth will set you free. This time we are being slaves of the CNE and the only way to free ourselves is by knowing the truth.

What if the polls are not opened, will they maintain a peaceful attitude?
I am not a supporter of violence. I am adept at a resistance that does not cause bloodshed. But on some issues it is beyond my will and the organizations are calling for a mobilization, an uprising, a road blockade. It worries me enormously because in this crisis a stoppage would further complicate the country. I am not promoting that, it is the National Electoral Council with this Machiavellian pact, between former President Correa and the former mayor of the main port, who are causing chaos. Stealing our votes is stealing a dream.

The votes of the indigenous movement can settle an election between two candidates with whom you have no affinity. What will he do?
I am in favor of the self-determination of peoples, free individual thinking and acting. I do not believe I am the owner of the will, of that huge vote that we reached, but it would allow me to give guidance: with corruption there is no way to negotiate. So now only to prevent Correa from coming, to ally ourselves with a recalcitrant, neoliberal right that is privatizing social security, health … we could not support that sector. And on the other hand, we could not support those who criminalized us, those who closed the media, freedom of expression, mega-mining from us. What to do? We must go the third way, which is our project, which is a true, ecological, unorthodox left.

That would take 4 years …
We cannot support identified sectors of the neoliberal right or the other progressive right in quotation marks. I will stay alone or with a small group, but we cannot even remotely align ourselves with sectors that are contaminated. I’m not going to decontaminate that, I’m going to end up subsuming.

In the Assembly will they be opposition?
Hopefully from Parliament we can articulate anti-extractivist laws, which not only benefit the sectors that monopolize these areas, but are laws that benefit the Ecuadorians of the parliament can also be seen to be audited. Having 10 women assembly members and 277 in total is a triumph for the indigenous movement. Perhaps it can be completed with the Presidency, not as an end but as a tool to solve the country’s problems.

Achievements of digital transformation are exposed in “A Digitized Country, A Modern Country”