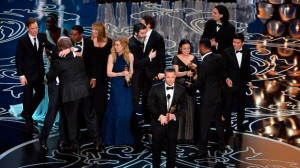 The film “12 Years a Slave” (12 years of slavery) won the statuette for best film of the year at the 86 of the Oscar, beating tape “Gravity”,of the Mexican Alfonso Cuarón. The Hollywood Academy Awards gala was held in L.a. Dolby theatre.

The British director of “12 Years a Slave”, Steve McQueen, who also managed the figurine as a producer, visibly nervous at the moment dedicated the victory to his mother, who was among the public, his father and “all those who have suffered and suffer slavery”.

The success of the film also marked the first Oscar of the career of Brad Pitt, the film producer, who already had been nominated previously on four occasions, three of them as an actor (“Twelve Monkeys”, “The Curious Case of Benjamin Button” and “Moneyball”) and one as a producer (“Moneyball”).

The movie is based on the biography of Salomon Northup, an African-American free from New York who is kidnapped and sold as a slave in the South where experience the barbarity of the owner of a plantation.