The turn of that August 14, 2019 was just beginning. In the spacious office, covered with tinted windows, the phone rang over and over again. 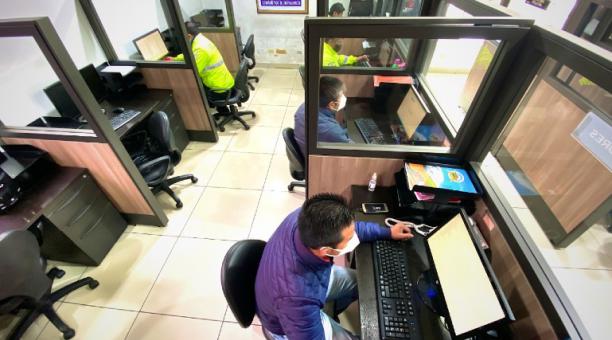 A woman called and said she knew where Anahí was, a 2-year-old girl who had been kidnapped eight days before in Pueblo Unido , a southern Quito neighborhood that was shocked by what happened. By then, no one knew anything about the child, but the person who contacted said she was a relative of those who kidnapped her.

He told the operator of the 1800-crime line that Anahí was in Coc a, Orellana . Before hanging up, he gave details of the house where he was.

The person who answered the call was agent Jaime Ruiz . Two years later, he remembers that the communication lasted five minutes. The data was passed on to Unase , which operates in kidnappings. Anahí was released.

The 1800-crime is a call center that was created 10 years ago to receive data on crimes perpetrated. Since then, it has collected information on robberies , drug trafficking , usury , hitmen , violent deaths or disappearances .

Access to this office, the only one in the country, is restricted. A police officer escorts to get there. There is silence in the place, no one speaks, only the sound of the keyboards of five agents on duty is heard .

Suddenly the phone rings . It rings three times and Jorge Ugsha , an agent with the rank of sergeant, answers . The caller is a man. It says that it communicates from Guayaquil .

In a low voice, he tells that at night, from his house, he sees his neighbor deliver small plastic bags and receives money . You think it’s about drugs .

At the end of the story, the agent asks for the address of the house, a point of reference and a contact number. Before hanging up, Ugsha assures him that the information is confidential and for the exclusive use of the Police .

15 minutes later, the data is sent to the Anti-Narcotics Directorate . It is the basis for opening an investigation .

Marcela Zambrano is head of the Crime Information Reception Unit . Next to his desk is a cabinet full of folders. There he keeps backups of the reports sent to the Judicial Police.

There lies, for example, a record October 2018. That month received information about people who grafitearon wagon the Metro of Quito . Carlos Sisa answered that call. He recalls that a woman said she knew where two of the suspects lived. With this alert, raids were carried out in the south of the capital and they were arrested.

With the supplies that were collected through the 1800-crime , on February 19, the Police also arrested the eighth most wanted in the country. The man is charged with rape and murder.

A person called the central office and said that the then fugitive was on a farm. That information was also received by Sisa. Every day, operators receive around 20 communications .

In one of the 10 cubicles that the headquarters has, agent César Mejía answers the calls. On the phone he listens to a man. He says he calls from Arenillas , in El Oro , and reports on a chulquero .

For nine minutes he narrates that the suspect threatens his family if he does not match the installments of a loan of USD 3,000. “I lost my job and could not pay the loan.”

The entire conversation is recorded. The informant provides details of the loan shark’s home and workplace . “I am afraid of retaliation.” The operator hangs up after assuring him that his identity will be protected.

To enter the 1800-crime, the agents undergo a polygraph and sign a confidentiality certificate . They receive training with psychologists and learn how to obtain sensitive information from people.

Alarms for spikes in infections are activated in five provinces