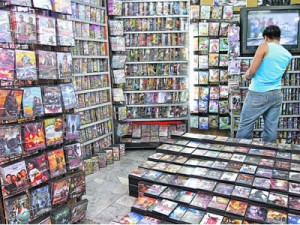 The Internal Revenue Service (IRS) reported 2,816 stores selling DVDs and CDs, they all work with law authorizations, issued by the Municipality and the IRS.

There are 497 locals operating with a IRS permit saying “retail sale of musical instruments, CDs, music scores and tapes” in Guayaquil. While in Quito, the figure rises to 532 stores.
According to the Ecuadorian Association of Dealers and Distributors of audiovisual products and related services there are over 8,000 businesses operating without permission in Guayaquil, and about 60,000 in the hole country.

The “formal combat against piracy” plan that the Ecuadorian Institute of Intellectual Property (IEPI) is working on has already closed six stores, located in the most recognized areas of Guayaquil. These stores belong to the 26 reported stores that were asked to submit the copyright certificates of the products they commercialize by the IEPI.

The IEPI indicated that the first phase of its plan, would not take measures to control the unlicensed sale in the bahia area, but it will develop a communication campaign to raise a copyright awareness.